Almost every city and town in today’s Israel has a “Balfour Street”, named after Britain’s foreign secretary Lord Arthur Balfour who promised a “national home” for Jews in Palestine. Canadian Zionists, like their counterparts in many countries around the world, are organizing activities to commemorate the Centenary of the “Balfour Declaration’ and promote Israel in Canada. Read more….

To Zionists, the “Balfour Declaration” has an almost mythical status – like the Magna Carta or the US Declaration of Independence. One hundred years ago, on November 2nd 1917, Britain’s Foreign Minister Arthur Balfour sent a letter to British Zionist Lord Rothschild, promising that Britain would help establish a “national home” for the Jewish people” in Palestine, which at that time was under the Ottoman Empire. 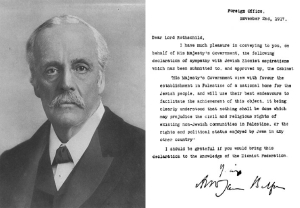 In fact, the Balfour Declaration had no legal status at all – it was a merely a promise by one imperial power about what it proposed to do with lands that were at the time under an other empire. But it did subsequently take on international legal status when its provisions were incorporated into the “mandate” that the League of Nations gave to Britain to rule over Palestine.

This year, Zionists around the world are organizing to use the Centenary of the Balfour Declaration to mobilize international support for a single Israeli state from the Jordan river to the sea, including the area that the international community says is “Occupied territory”.

Reflecting Britain’s role in the creation of the State of Israel,  the Queen of England (who is also the Queen of Canada) has been invited to make a celebratory trip to Jerusalem at the end of the year. A very slick international website has been launched called Balfour 100 with lots of excellent photos and research materials. There is even a rather interesting youtube interview with the current Lord Rothschild  (the fourth) about his great uncle and the origins of the Declaration.

Canadian Zionists are already getting involved.

In a recent article in the Winnipeg Free Press, Mike Fegelman, Executive Director of Honest Reporting Canada argued that marking the Balfour centenary is an historic opportunity for Canadian Zionists to promote Israel.

An organization called “Canadians for Balfour 100”  has been created which, according to its website, is “committed to intensive pro-Israel education”.

One of the first activities of Canadians for Balfour 100 (CB100) was to send a letter to Israeli Premier Benjamin Netanyahu, celebrating the election of US president Donald Trump. “The Jewish People’s right to Judea, Samaria and Gaza, needs to be heard by the world directly from your lips, to eradicate and counter the lie that Israel is an occupier”, urged CB100 co-chairs Goldie Steiner and Irving Weissdorf  just prior to Netanyahu’s visit to the White House. (Judea and Samaria are the terms Israel uses to describe what the international community refers to as the “occupied Palestinian territories” of the West Bank.)

Based on this and other information on its webpage “Canadians for Balfour 100” seems to be using the Balfour declaration to mobilize public support for a single Israeli state from the river to the sea, including the area that the international community says is “Occupied territory”.

Canadians for Balfour 100 is supported by a number of prominent Zionists including journalist Barbara Kay of the National Post. It also enjoys affiliation from a number of Canadian national organizations including Bnai Brith Canada, Hasbara Fellowships Canada, and the International Christian Embassy Jerusalem. The group’s advisors include Alan Baker, a former Israeli Ambassador to Canada.