Tarek Loubani is a Palestinian-Canadian emergency physician who regularly volunteers in the Gaza Strip. On January 14th, Dr. Loubani will discuss his experiences on the front lines delivering healthcare in Gaza’s largest hospital, Al-Shifa and on the front lines of the recent Great March of Return. He will be introduced by Alex Neve, Secretary General of Amnesty International Canada. Read more…and come to hear them both… END_OF_DOCUMENT_TOKEN_TO_BE_REPLACED

Guest columnist Arthur Milner argues that while Palestinians are victims, they shouldn’t wait for the west to come to their rescue. Read more… END_OF_DOCUMENT_TOKEN_TO_BE_REPLACED

Progressive Jews from across Canada participated in a discussion with young Palestinians living in Gaza in a recent webinar organized by Independent Jewish Voices Canada. They discussed aspects of life in Gaza today, finding ways to be optimistic while living in the constant shadow of death and destruction. Here, Corey Balsam, IJV’s National Coordinator (top left) moderates the conversation with Asma Tayeh (right) and Issam Adwan (bottom). Read more. END_OF_DOCUMENT_TOKEN_TO_BE_REPLACED

At the recent NATO summit, US president Trump called Canadian prime minister Trudeau “two-faced” for gossiping about him behind his back. That was certainly mean and rude. But guest columnist Grafton Ross argues that it might be an accurate description of the Trudeau Liberal policy towards Israel/Palestine. Read more… END_OF_DOCUMENT_TOKEN_TO_BE_REPLACED 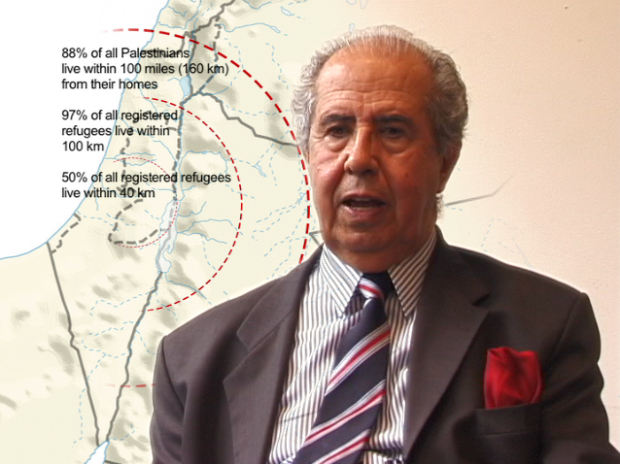 Salman Abu Sitta was ten years old when his Palestinian village was overrun by Zionist forces and his family forced to take refuge in Gaza. His life in exile took him to many countries, including Canada where he became a citizen, taught at UWO and even helped found the Canadian Arab Federation. But he never gave up thinking about and planning for the day when he and his family would return to the land from which he was expelled. A new memoir sheds light on the drama of his expulsion, and the struggle to regain justice for Palestinian refugees. Read more. END_OF_DOCUMENT_TOKEN_TO_BE_REPLACED