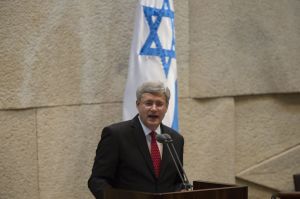 “Of course, criticism of Israeli government policy is not in and of itself necessarily anti-Semitic. But what else can we call criticism that selectively condemns only the Jewish state (…). This is the face of the new anti-Semitism. It targets the Jewish people by targeting Israel.” 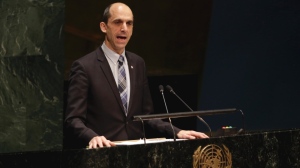 “Canada has taken a zero-tolerance approach to anti-Semitism and all forms of discrimination (…) towards Israel, and attempts to delegitimize Israel such as the Boycott, Divestment and Sanctions movement.”

Mr. Harper and many of his ministers have repeatedly threatened those who “single out” Israel for criticism. It feels like a campaign of intimidation. OK I give up! I will stop doing it. Read why (and how…)

Mr. Harper and his government appear to be trying to stop what appears to be a rising tide of criticism of Israel. In doing so, they enthusiastically adopt the position of the Israeli government and of the Israel lobby in Canada.

A special target appears to be The BDS movement (which proposes a boycott of Israel). The BDS demand to “end the occupation’ is a big annoyance to Israel. But the other two demands of the BDS movement, (that for equality for non-Jews living inside Israel, and for a just solution for the refugees) are especially bothersome because they put into question the legitimacy of the very idea of a State for Jews.

While Mr. Harper has not yet mentioned any specific threats, let alone laid any charges, it is clear that he is throwing down the gauntlet. The intent seems to be to ‘chill” criticism of Israel in Canada by scaring those who are concerned.

Faced with possible unknown consequences, I have decided to give up. Therefore, I promise that henceforth I will not single Israel out for special criticism.

Instead, I promise to focus my attention on criticizing any states which have these ten characteristics:

Mr. Harper and Mr. Blaney, I am sure you would agree that any country that even comes close to this description would be very far from from Canadian values of fairness, equality, democracy, respect for human rights, etc.

Of course, I know there is lots of evil in this world. But compared to the resources at your disposal, my knowledge is limited. In order to relieve any confusion in my mind, and to make absolutely sure that I am in your good books, I would invite you to ask your staff to prepare and make public a list of “criticizable” countries based on these, or similar criteria.

Once identified, I would happily join you in encouraging the Canadian government, and the whole Canadian population, to support and encourage a program of boycott, divestment and sanctions against any such place.