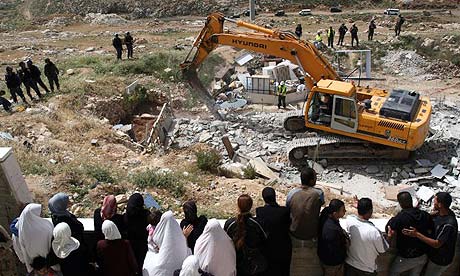 Desperate and frightened Palestinian residents watch a home being destroyed in the West Bank as Israeli military stand guard. The total number of Palestinian homes destroyed in the 67 years since the creation of Israel almost certainly exceeds 100,000. Why does Israeli do that?  To find out watch my video seminar organized by the National Council on Canada Arab Relations (NCCAR)

As Prime Minister Harper and Liberal leader Justin Trudeau congratulate Israel on its the 67th anniversary, I invite you to consider one aspect of the human cost of the creation of the State of Israel: the destruction of Palestinian homes and villages. The demolition program began in 1947 and continues to the present day. I have prepared a 41 minute documentary video with on-site video footage and interviews from 6 different sites in Israel and the West Bank.

Three footnotes to the video:

1.  How many exactly have been destroyed?

I don’t know. The first homes were destroyed in Jaffa in the very early days of the Nakba in December 1947 – well before the declaration of the State of Israel. The total number of Palestinian homes destroyed between 1947 and 2015 would seem to be reliably estimated at somewhere between 100,000 and 150,000. Anyone who has a better number please share it.

This estimate is based on what we do know::

Israel gives many reasons for the destruction of Palestinian homes. Here are some of the most common ones:

3.  Where are the destroyed homes?

From 1947 – 1967, the bulk of the destruction of homes was concentrated inside the borders of today’s Israel.

However, after ’67, when Israel took over East Jerusalem, the West Bank and Gaza, its destructive efforts have been concentrated in the “occupied territories”. Nonetheless, significant land confiscation and home destruction continue inside Israel, particularly in the Galilee and in the Negev.