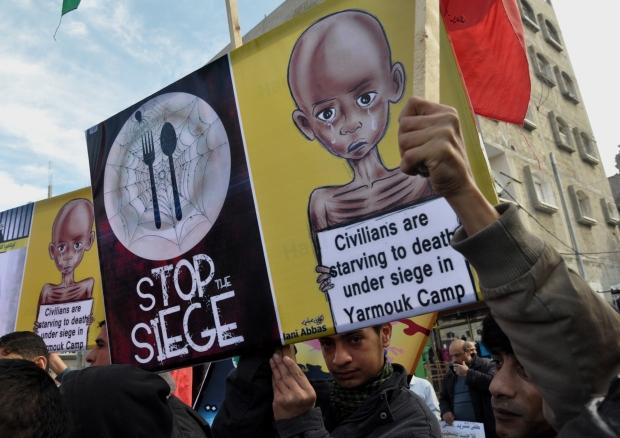 Senior UN official Chris Gunness was sharply critical of the Canadian government this week over its refusal to give humanitarian aid to starving Palestinian refugees trapped in Yarmouk, Syria. Read more.

April 8th. In a lengthy interview today on CBC’s flagship program “The Current”, Chris Gunness, chief spokesman for the United Nations agency responsible for Palestinian refugees discussed the unfolding humanitarian catastrophe in Yarmouk. Yarmouk is a Palestinian refugee camp located near the centre of Damascus, Syria. 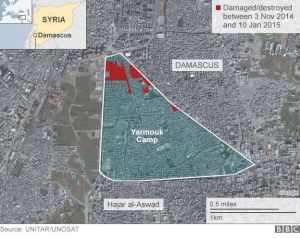 The Yarmouk Camp was created for Palestinian refugees in 1948, just outside the centre of Damascus. It is now a neighbourhood in the middle of a greatly expanded city.

“The Palestinian refugees trapped by the desperate fighting in Yarmouk are literally starving. On average, they have been living on less than 400 calories a day for over a year”, indicated Gunness. He pointed the finger at countries such as Canada, which voted to create the refugee agency, but refuse to provide necessary funding.

Gunness indicated that The United Nations Relief and Works Agency for Palestinians (UNRWA) faces several obstacles to providing much needed food and medical supplies to desperate civilians. The fierce fighting between opposing forces has resulted in a sharp deterioration in the conditions for thousands trapped in Yarmouk. In addition, UNRWA faces a desperate financial crisis on several fronts as the situation in Syria comes at the same time as there is great need for assistance in Gaza.

”Today, we ran out of food, and now it’s the first day without water. No aid at all is getting into the camp.  We have been under siege here for 750 days.’ – Palestinian in Yarmouk camp, a few days ago

“An inconceivable human tragedy”, is the way the Israeli daily paper Ha’aretz described the situation, calling on the Israeli government “to put politics aside” and help the desperate people. However, Haaretz proposed that the refugees be allowed to enter the West Bank, which is under the control of the Palestinian Authority. The paper avoided mentioning that the Palestinian refugees in Yarmouk are actually from today’s Israel. They were expelled from the Galilee in 1948 when it was incorporated into the new State of Israel and have been trapped in refugee camps in Syria ever since.

Canada has historically been an important funder of UNRWA, providing about $11 million annually. However, the Harper government stopped all funding for the agency in 2010.