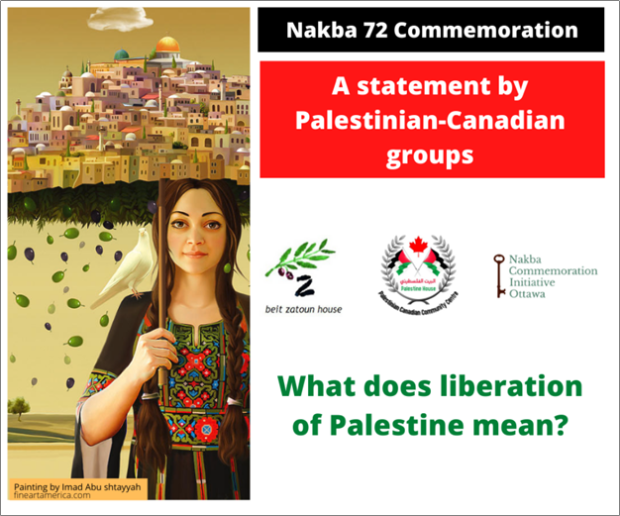 In November 1947 Canada voted at the UN in support of giving over 50% of historic Palestine to European Jews to allow them to create a new state after the horrible events of the Holocaust. But we paid scarce attention to the appalling consequences for the people who were already living there. A number of Palestinian Canadians remind their fellow Canadians that the Palestinian ‘Nakba”, which started 72 years ago, is not over. Read the statement of the Nakba Commemoration Initiative…

Statement from Nakba Commemoration Initiative and other Palestinian Canadian organizations

In this statement we have both grief and hope to share.

Israel was created in 1948 on Palestinian land and the destroyed remains of more than 500 Palestinian villages and cities, after forcing 750 000 Palestinians to leave their homeland. They became refugees, mainly in neighboring countries, where they still live up to now.

This is what Palestinians call Nakba (Catastrophe) and commemorate every year on May 15th.

This could not have happened without the support of the British Government at the time.

As World War I came to an end, British forces occupied Palestine (1917 – 1948). The British occupation/mandate supported and facilitated a colonial-settler project in Palestine called Zionism.  Settlers came mainly from Europe. Eventually, this led to a disaster that is still taking place up to day.

Israel prevents Palestinian refugees from returning to their homes and continues dispossession of Palestinian people and land. It has imposed a blockade against people in Gaza for 13 years now. It runs an apartheid system in Jerusalem and the West Bank and discriminates against Palestinians who remained inside Palestine 48 / Israel.

Palestinian refugees should return to their homes in Palestine according to the Universal Declaration of Human Rights, article 13:

“Everyone has the right to leave any country, including his own, and to return to his country”.  UN resolution 194 also supports this right.

Israel should end the blockade against people in Gaza, and end its military and violent oppression of Palestinians everywhere.

On this 72nd anniversary of Nakba, we believe that Canada and the international community can help with ending this tragedy and bringing a light of hope.

Many Palestinians are working towards building a new system in historic Palestine where everyone, regardless of their religious or ethnic background, enjoys dignity, freedom, and safety.

We know that this vision is not easy to accomplish, but it is the only humane and civilized choice for the future. We need your support to make this happen.

Canada and the international community can put pressure on Israel to change its destructive behavior. This is what the Boycott, Divestment, Sanctions (BDS) movement calls for, and we support this call.

This universal concept of freedom and equality for all in historic Palestine is what we call “liberation”. Liberation from Zionism as a form of violence and militarization.

We hope you join us in this liberation.

Canada Talks Israel Palestine (CTIP) is the weekly newsletter of Peter Larson, Chair of the Ottawa Forum on Israel/Palestine (OFIP). It aims to promote a serious discussion in Canada about the complicated and emotional Israel/Palestine issue with a focus on the truth, clear analysis and human rights for all. This statement of the Nakba Commemoration Initiative does not necessarily reflect the views of Canada Talks Israel Palestine. Readers who have a different point of view are invited to make comment.