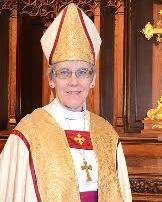 Rt. Reverend Linda Nicholls (l), Primate of the Anglican Church of Canada, Rick Cober Bauman, Executive Director of the Mennonite Central Committee, and Nora Sanders (r),  Secretary Gen of the United Church of Canada were among nine signatories of a joint letter to Foreign Affairs minister Francois-Philippe Champagne urging Canada to speak out in defense of international law as Israel threatens to annex more territory in the Occupied West Bank. Read the text of their strong letter…

Several of Canada’s largest and most influential Christian organizations, representing nearly two million members, have written a powerful letter to the Liberal government urging a stronger stand on the issue of Israel’s threat to take over even more of the territory Israel occupied in 1967.

The letter was addressed to Foreign Affairs minister Francois-Philippe Champagne and copied to Prime Minister Trudeau. Copies were also sent to the leaders of all 4 other parties represented in the House of Commons.

The letter called on the Government of Canada to:

This most recent letter follows up to a previous letter sent more than two months ago by Kairos Canada, an ecumenical Christian organization. In that letter, Anne Mitchell, Chair of Kairos Canadian Ecumenical Christian Initiatives urged Prime Minister Trudeau to clearly reject Donald Trump’s Proposed Peace Plan. Unfortunately, Trudeau did not do so.

Those who share the concerns of the church leaders can write directly to Prime Minister Trudeau, Foreign Minister Champagne and copy opposition letters and their own MP. It is also a good idea to copy your friends so they will also be aware of your feelings on the issue.

Canada Talks Israel Palestine (CTIP) is the weekly newsletter of Peter Larson, Chair of the Ottawa Forum on Israel/Palestine (OFIP). It aims to promote a serious discussion in Canada about the complicated and emotional Israel/Palestine issue with a focus on the truth, clear analysis and human rights for all. Readers who have a different point of view are invited to make comment.