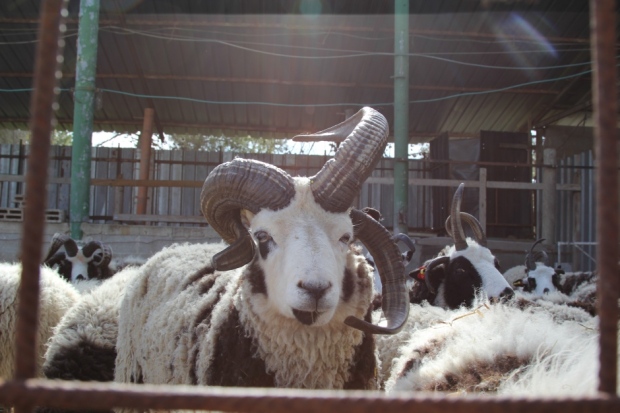 A recent CBC story reported that these sheep have just come from Canada to Israel where they now live on a farm on land confiscated from Palestinian peasants in 1948. CBC’s Derek Stoffel seems to think this is a good news story. But his article has some major issues. Read more…

According to CBC journalist Derek Stoffel, a historic breed of sheep is now finally back in Israel, thanks to Canadians Jenna and Gil Lewinski of Abbotsford, B.C.

Stoffel reports that the link between the Lewinski’s flock and sheep which used to roam the middle east in biblical times has been established by reading… the bible.

“I thought they were novelty sheep, but it wasn’t until I took out my Bible and started researching that I was truly amazed,” Gil Lewinski was quoted as saying.

It isn’t shocking to know that some people take the Bible literally. But it is rather surprising that a CBC journalist would do so.

“The Old Testament book of Genesis says the patriarch Jacob bred speckled and spotted varieties to produce sheep that are white with dark patches and have up to six horns“, helpfully adds CBC journalist Stoffel, seemingly verifying Lewinski’s conclusion.

In addition to verifying whether CBC considers the Bible as a reliable source of historical information, CBC’s research department might also want to check out another aspect of Stoffel’s story.

According to Stoffel, the sheep have been brought to a farm in the Israeli agricultural town of Nes Harim, west of Jerusalem.

Nes Harim has a dark history.

It is an Israeli “moshav” (a kind of collective farm) created on confiscated Palestinian land after the local inhabitants were driven out of a Palestinian village.

According to Wikipedia, “After a military assault on Bayt ʿIṭāb by Israeli forces in October 1948, the village was depopulated and demolished. Many of the villagers had fled to refugee camps in the West Bank less than 20 kilometres (12 mi) from the village. In 1950, an Israeli moshav, Nes Harim, was established north of the built up portion of Bayt ‘Itab, on an adjacent peak. Meanwhile, the Jewish National Fund established a park over the ruins of Bayt ‘Itab and surrounding villages, in a deliberate attempt to erase their very existence – an act echoed nearly 20 years later by the JNF’s Canada Park.

It is not clear whether Mr. Stoffel knows about the dark history of the Moshav. But it would be reasonable to expect a Canadian journalist to have at least a passing interest Israel’s recent history. After all, its a lot easier to prove that Nes Harim was established on the remains of a Palestinian village destroyed 70 years ago than to use the bible to prove that sheep from Abbotsford actually came from the middle east over 2000 years ago.