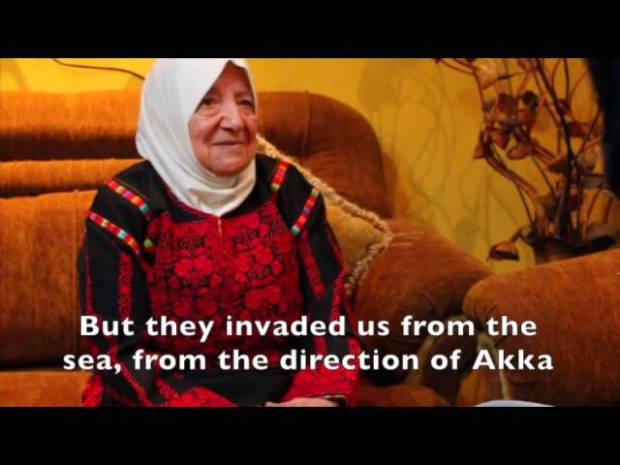 In a decade or so, the voices of the original Nakba survivors will be extinct. But 86 year old Mariam Fatallah remembers clearly being expelled from her village in 1948. She wants to be sure that others know what happened to her and hundreds of thousands of Palestinian refugees.  She is making a tour of the USA and Canada to share her memories of expulsion and of living as a refugee in Lebanon. Read more

Mariam Fatallah, now 86 years old and respectfully known as Umm Akram (mother of Akram), has spent the last 68 years in crowded, makeshift refugee camps in Lebanon. She has raised three generations in the same camps, all waiting to return to their home in Palestine. She has lived through five Israeli invasions of Lebanon, as well as the 1976 Tel al-Zaatar camp massacre that killed more than 2000 of the refugees there.

Umm Akram wants meet you and tell her story in person.  So does Amena Ashkar, her granddaughter and great granddaughter of other Nakba survivors, who has known no other home than refugee camps.

Umm Akram and Amena have a different message from other Palestinians.  They are among six million Palestinians not living in Palestine – more than those who are.  They are citizens of no government at all, not even the Palestinian Authority.  They are not living under Israeli occupation. Israel does not allow them to visit their homes, much less live there.  Amena has never met an Israeli, and Umm Akram not since 1948. As exiles, they have a different perspective from Palestinians in Jerusalem, the West Bank, Gaza and the part of Palestine that became Israel.

The North American Nakba Tour is organized by a consortium of American organizations. The Canadian part of the tour is being coordinated by the Palestinian Canadian Congress.

Public appearances in Canada will be: