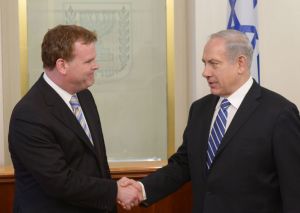 See my remarks to a demonstration, Sunday August 17th

Today, I am standing here in front of the Office of John Baird, Canada’s Minister of Foreign Affairs. I am carrying a Canadian flag.

Millions of other Canadians believe in those values too, as do I.

But those values mean nothing if they are just words on paper. We believe and expect that Canada should apply those values both inside Canada and in our dealings with the outside world.

How should fundamental values, like fairness, be applied in the Israel/Palestine conflict?

This week, Israeli and Palestinian negotiators are at work in Cairo trying to work out an agreement to end the hostilities in Gaza. The Palestinian side is composed of representatives of all the major Palestinian political parties, including Hamas and Fatah. Their main demand is to have the 7 year siege of Gaza ended. They want access to Gaza by sea and air, under international supervision. They say that life under a continued blockade is not livable.

According to the press, the Israelis want to continue the siege and have Gaza demilitarized.

Should we support a continuation of the blockade, or should we demand that the blockade of Gaza be lifted?

To be serious about this issue, to develop a fair position, a position that reflects Canadian values, we need to have a good understanding of the situation.

I am calling today on Foreign Minister John Baird to lead an all-party Parliamentary fact-finding mission to Gaza to find out what the situation is on the ground there.

We all know that Mr. Harper and Mr. Baird visited Israel last year, but neither of them visited Gaza. In fact, since the blockade of Gaza began 7 years ago, according to Ipolitics, 116 MPs visited Israel, most of them paid for by the Israel lobby. But no Canadian Parliamentarian from any party has visited Gaza in at least 3 years

If Canada is going to develop a position on the Gaza conflict based on the Canadian value of fairness, at the very least we need to be listening to both sides.

If Minister Baird is going to be a serious minister of Foreign Affairs, and if Canada is to be taken seriously on the world stage, we need to know the facts on the ground.

Going to Gaza is not impossible. All Mr. Baird has to do is ask the Israelis for permission.

Of course, we can expect that Israel will say that it is too dangerous to go there. That Gazan terrorists might kill or capture them.

But think of it for a minute. Does that make sense?

For 7 years, Gaza has been cut off from the outside world by Israel’s blockade. Finally a delegation from Canada comes to take a look. Does anybody believe that the Palestinians would want to attack someone from a Western country who is finally paying attention to them?

In fact, lots of senior political leaders from other countries have visited Gaza in the past and continue to do so, usually under the protection of UNRWA. Furthermore, Mr. Baird could get advice from any number of NGO’s which operate in Gaza, including the International Committee of the Red Cross, and Human Rights Watch, or the Carter Centre.

Who should they talk to? Mr. Baird will probably not want to meet with the representatives of the elected government of Gaza, because he calls them a “terrorist” organization.

But I have some other suggestions:

Friends, even President Obama recently conceded that Gaza cannot be permanently closed off from the world.

Canadian politicians on a fact finding mission to Gaza will ask their own questions, make up their own minds, and share their views with their colleagues back in Ottawa.