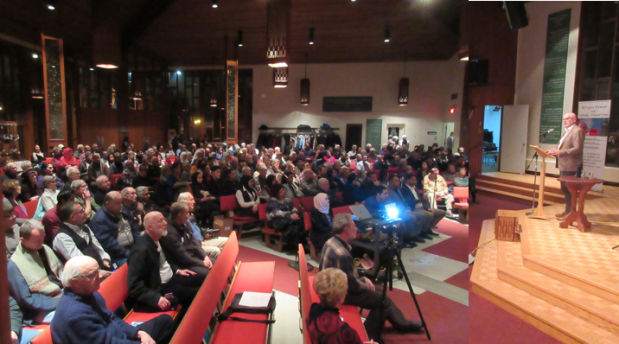 Dr. Tarek Loubani entranced a sell-out crowd of about 300 in Ottawa on January 14th with his graphic descriptions of working as an emergency doctor in Gaza under fire from Israeli army snipers. Prior to Loubani’s presentation, Alex Neve, Secretary General of Amnesty International Canada called for an end to the blockade of Gaza and for banning the sale of weapons to Israel. Read more.

Anita MacLean, chair of the Global Justice Working Group (and co sponsor of the event) welcomed the crowd to the First Unitarian Congregation Worship Hall.

Loubani’s presentation was an unusual mix of different elements. He spoke of his innovative work (the “Glia Project”) using 3-D printing technology to produce low cost stethoscopes which are very hard to find (and very expensive) in Gaza. He talked about the day he was shot by an Israeli sniper in 2018 and his thoughts as he was taken to the hospital. Also about his feelings when his best friend Moussa, the paramedic who rescued him, was shot and killed a few hours later. And about the reasons behind the “Great March of Return” – why so many frustrated young Palestinians keep risking their lives in a desperate cry to the outside world about families expulsion from what is today’s Israel over 70 years ago, and their 12 year confinement in the tiny area that is Gaza.

Alex Neve, Secretary General of Amnesty International Canada, made a passionate and powerful critique of Israeli human rights abuses towards the Palestinians over decades. “We have extensively reported on the widespread war crimes committed by the Israeli military, including its attacks on Lebanon in 2006 and its many full-on aerial bombardment of Gaza,” he said.

Neve repeated the Amnesty International’s call for an international ban on sales of weapons to Israel in the wake of Israeli killing and maiming hundreds of Palestinian protesters in Gaza. “The right to protest is an internationally accepted human right”, said Neve, “By shooting protesters inside Gaza, Israel is flagrantly violating it.”

A video of the whole event is available in several sections:

In response to a call for financial support, over $3000 was collected from the audience to support Loubani’s ongoing work in Gaza, including a $1000 anonymous donation!!

Dr. Loubani (left) with representatives of the 3 co-sponsoring organizations: Left to right: Anita Maclean of the Global Justice Working Group, Peter Larson of the Ottawa Forum on Israel/Palestine, and Alex Neve, of Amnesty International Canada.

Canada Talks Israel Palestine (CTIP) is the weekly newsletter of the Ottawa Forum on Israel/Palestine (OFIP) which aims to promote a serious discussion in Canada about the complicated and emotional Israel/Palestine issue.