In a break from precedent, Canada voted in favour of a motion supporting self-determination for the Palestinians at the United Nations General Assembly last December – despite the objections of Israel, the USA and the Israel lobby in Canada. Most people were surprised, because for the last decade Canada has always voted faithfully with Israel. Does this augur a significant policy change? How did we vote on 12 other important resolutions? Here is the record. You be the judge…..

Summary report on how Canada voted

Every December, the United Nations General Assembly votes on a wide range of important international issues. Israel is always a special target for criticism because, for 73 years, it has refused to comply with UN resolutions.

In the General Assembly (and around the world) support for the human rights of Palestinians is overwhelming. In most cases resolutions, critical of Israel are supported by a significant majority of UN members. Only a handful of countries, including Israel, the USA, Canada and a number of tiny south pacific nations, normally disagree. (Depending on the resolution, there can also be a significant number of abstentions.)

Why does Canada usually vote with Israel?

Officials at Global Affairs Canada give 3 reasons for Canada’s steadfast support for Israel on these resolutions:

Of course, there is substance to this. 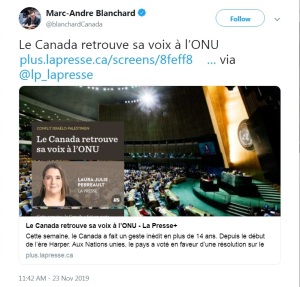 Marc-Andre Blanchard, Canada’s Ambassador to the UN, was jubilant when Canada cast its vote in favour of Palestinian self determination. “Canada has found its voice”, he tweeted. Alas, we seem to have lost that voice quickly afterwards.

A great deal of media attention was focussed on the fact that, breaking with historical precedent, this year Canada voted IN FAVOUR of a resolution supporting Palestinian self determination.  In response, Trudeau came under hostile fire from the Israel lobby and even from senior US politicians like former US Ambassador to the UN, Nikki Haley who said Trudeau had made a “deal with the devil”.

Mr. Trudeau defended himself by reassuring Israel’s supporters that Canada remains “steadfast” in its support of Israel and arguing that the vote was consistent with Canada’s longstanding support for a 2 state solution.

Global Affairs insiders note that Canada was caught in an awkward squeeze, as the UN vote came on the DAY AFTER US Secretary of State Michael Pompeo announced that the US no longer sees Israeli settlements in the West Bank as “illegal” – in direct contravention of Canada’s often stated position (and of UN Security Council resolutions).

Some observers link the vote to Canada’s attempt to save our bid to join the UN Security council. Perhaps that was a factor, but our chances seem very remote. As a former Canadian ambassador to the UN noted, “At this point, that seems like a desperate “hail Mary” play”.

So, how did we vote overall?

In summary – 1 vote in favour, 1 abstention and 11 votes against human rights for Palestinians.

Here is the record on all 13 resolutions, based on extensive research by the OFIP research department.  (For simplicity, we give here only a brief summary of the intent of each resolution. More information, including a full text of each resolution and a country by country voting record can be found by clicking on the resolution number following the title.)

Canada Talks Israel Palestine (CTIP) is the weekly newsletter of the Ottawa Forum on Israel/Palestine (OFIP) which aims to promote a serious discussion in Canada about the complicated and emotional Israel/Palestine issue.

If you support our educational mission, why not make a donation?