A frightened Liberal party hastily revoked the candidacy of Hassan Guillet, a well known moderate Muslim cleric, after a pro-Israel lobby group claimed he had made anti-Semitic statements. Anti-Semitism is not acceptable and no political party should accept anti-Semitic candidates. But based on the evidence provided, the claims against the Imam are ill-founded. Read more…

It is possible that Imam Hassan Guillet is an incorrigible racist and anti-Semite, of course. But that would be a big surprise to those who watched his thoughtful and moving eulogy following the Quebec City Mosque massacre in 2017. His remarks, which included compassion for the gunman, criticism for those who had put racist ideas in his head, and a call for tolerance among all citizens irrespective of religion, were circulated around the world.

Pro-Israel lobbyists, including “Bnai Brith Canada”  have been gunning for Mr. Guillet for a totally different reason – he is very critical of Israel, and if he were to be elected, he would be a powerful and credible critic inside the Liberal caucus. They have dishonestly used the accusation of “anti-Semitism” as a way to scare the Trudeau Liberals away from him.

It seems to have worked … but Guillet is fighting back. He has responded on Facebook and in several media interviews. Many friends – Muslims, Christians, Jews and others have leapt to his defense. 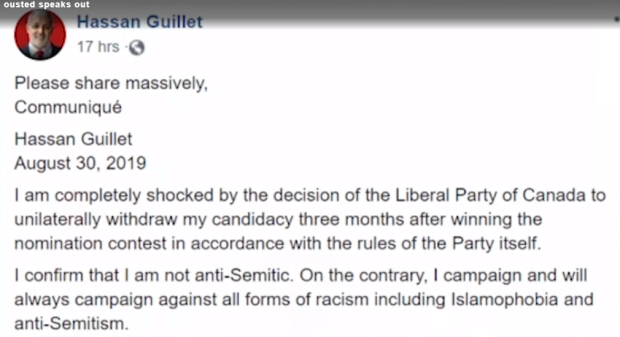 Guillet responded quickly and forcefully on his FB page both to the accusations of anti-Semitism, and to the cowardly over-reaction by the Trudeau Liberals.

What, exactly are the statements or actions by Mr. Guillet that Bnai Brith Canada finds so offensive?

The two main concerns of Bnai Brith are that:

Let’s examine the evidence and see. Is there any way Guillet’s statements can really be called anti-Semitic?

The claim that Zionists “control” the American government

If Mr. Guillet had claimed that “Jews” control the American government, this would have been an anti-Semitic slur. (And it would have also been wrong). But it is not what he allegedly said. He referred to “Zionists”. Judaism and Zionism are not the same thing. The distinction is an important one. Not all Jews are Zionists, and not all Zionists are Jews.

In fact, both US vice-President Mike Pence and Secretary of State Mike Pompeo are “born again” evangelical Christians who support the Christian Zionist idea. And Donald Trump who is also Christian, aggressively promotes a Middle East policy (e.g. moving the US Embassy to Jerusalem and recognizing Jerusalem as the Capital of Israel) advocated by the Zionist Organization of America.

To say that people who support Zionism have an overwhelming influence in US policy towards Israel/Palestine is neither exaggerated, nor anti-Semitic.

Is the accusation of Jared Kushner’s “dual loyalty” really based on “paranoid anti-Jewish conspiracy theories”?

But again, Mr. Guillet did not say “Jews support an Israel first” agenda. He targeted a specific person, Jared Kushner. Specific individuals may well have loyalties to other countries that are stronger than those to the country of which they are citizens. If they go too far, they could even be spies.

This is the case of Jonathan Pollard, a former American intelligence officer.  Mr. Pollard was born in Galveston Texas to a Jewish family. In 1987, Pollard pleaded guilty to spying for and providing top-secret classified information to Israel. He was sentenced to life in prison for violations of the Espionage Act. Clearly, to say that Mr. Pollard’s loyalties to Israel were greater than his attachment to America is a statement of fact, and not evidence of anti-Semitism.

As reported in a recent article in the Israeli daily Ha’aretz, the Zionist movement actively encourages diaspora Jews to see their first loyalty to Israel, over their loyalty to their country of residence.

While there is no evidence that any Canadian Jew has ever gone so far as to spy for Israel like Mr. Pollard, according to a CBC report in 2017 over two hundred Canadian Jews had chosen to show their loyalty to Israel by serving in its military, rather than that of Canada.

A blanket allegation of disloyalty against American or Canadian Jews by Guillet or anyone else would be both wrong and anti-Semitic. But to point out that specific Canadians or Americans do have allegiances elsewhere is neither racist, nor anti-Semitic, if the claim is backed by credible evidence.

The root of the problem

The root of the Liberals’ problem is that Trudeau himself is not clear on the difference between opposition to Zionism (an exclusive race/religious-based political ideology which supports special rights for Jews in a Jewish State created on Palestinian land), and anti-Semitism (a hateful form of racism against Jews, analogous to Islamophobia or racism towards Black or Indigenous Canadians.)

Two years ago, Trudeau demonstrated this confusion when he committed himself and his party to fighting “anti-Semitism and anti-Zionism” as if the two were the same thing, when they are clearly very different.

As long as this confusion between anti-Zionism and anti-Semitism continues, the pro-Israel lobby will be able to continue to use the “anti-Semite” label to attack legitimate critics of Israel, and the frightened Liberals won’t know what to say.