Ahmed Alnaouq (l.) is CTIP’s correspondent in Gaza. He and Rana Shubair (r.) are active in a small NGO which helps young Palestinians in Gaza to electronically “leap over” the punishing Israeli blockade to contact the outside world. Ahmed appeals to Canadians for help – both financial and editorial – so they can share their stories with you. Read his appeal…

More than 60% of the people living in Gaza are under 25 years of age (cf. Canada barely 25%). Gaza has a nearly 100% literacy rate (cf. USA 86%). It has 6 universities. Yet its young people, even educated ones, have very few job prospects (unemployment is at over 50%). Trapped in tiny Gaza (15% of Ottawa’s area) there is no escape.  Depression and post traumatic stress disorder are rampant. 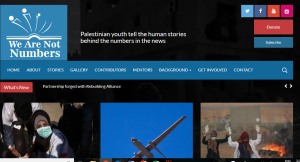 “We are not Numbers’ helps young Palestinian men and women tell their stories to the outside world.

But in Gaza, as in Canada, hope springs eternal. Many enterprising youngsters have created NGO’s which are looking for ways forward. One of them is We are Not Numbers (WANN), a tiny organization that uses the English language to link young Palestinian men and women to the outside world in spite of the Israel blockade.

(The name “We are Not Numbers” refers to their desire to be seen by the world as more than just nameless inmates in what a former UK Prime Minister has referred to as the world’s largest outdoor prison.)

WANN pairs up aspiring young Palestinian writers, journalists and videographers with English-speaking volunteers outside Gaza to help them tell their stories.  In the process they learn about the outside world, improve their communication skills and, importantly, keep up their morale.

Click here to see a short video in which WANN celebrates its 3rd birthday with a cake and a party.

The WANN website now has accumulated dozens of touching stories and videos. They range from the intensely personal to the romantically poetic. Only a few are explicitly political. Perhaps that is one of the reasons WANN has been able to avoid the fate of many Palestinian Facebook which have been blocked on the grounds that they promote promote “incitement” against Israel.

On the website you can also find the names of dozens of “mentors” from around the world who offer their time to help these amazing young people express their pain and suffering and also their hopes and dreams in a second language.

WANN has launched a small fundraising campaign. with the objective of raising $20,000 to buy new computer and video equipment. Donations of as little as $25 will be most welcome. I gave $50 and got a picture of my name written on the sands of Gaza’s beaches.

CTIP’s Gaza correspondent, Ahmed Alnaouq makes a strong plea to Canadians who live in a huge, peaceful, democratic country for help – both financial and editorial.

In 2014, my older brother and many of our friends were killed by Israeli bombs. I was devastated. Not only because I lost loved ones, but also because I felt isolated. I was shouting into a void.

But today We Are Not Numbers (WANN) gives me and my fellow writers a feeling of self-worth and purpose. I am particularly encouraged by the visibility we have managed to achieve for youth voices in Gaza during the Great Return March.

I was happy to read that your Prime Minister, Mr. Trudeau, has called for an independent investigation into Israeli snipers killing hundreds and injuring thousands of peaceful demonstrators in the last few weeks. I hope he carries through.

Those of us who are trapped in Gaza need food and shelter. But we also need hope. We need contact with the outside world so we can tell our story. Please help us keep WANN going. Donate what you can today and share this link with your network via social media and (even better) email. Thank you from the bottom of my heart!

Ahmed Al Naouq – Gaza Project Manager, We are Not Numbers.

If you read this blog, and if you want to encourage young Palestinians to overcome their isolation and despair – consider making a small donation. Consider, too, offering your services as an English-language “mentor” to one of the dozens who are asking for help.