American/Israeli academic Gershon Shafir spoke on November 14th to a large crowd at the Jewish Community Centre in Ottawa. He was very critical of Israel’s seemingly unstoppable slide towards intolerance and right wing politics, but still held out hope for a 2 state solution. Many in the audience were relieved, but not everyone was convinced. See this report by guest columnist Diana Ralph, of Independent Jewish Voices Ottawa. 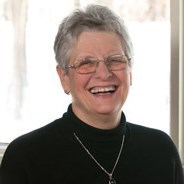 To mark the 50th year of Israel’s occupation of the West Bank and Gaza,  Canadian Friends of Peace Now (CFPN) hosted Gershon Shafir to speak  in Ottawa on November 14 about his new book A Half Century of Occupation. His talk, “Too Late for Two States?” attempted to resurrect the dwindling legitimacy of the “two-state solution.”

Peace Now and its Canadian affiliate, CFPN, define themselves as “the Gatekeepers of the Two State Solution”.  As liberal Zionists, they are committed to protecting Israel as a Jewish state.  They have always opposed Israel’s occupation of the West Bank and Gaza as bad for Israel because it potentially makes Jews a minority (and secondarily because it’s bad for Palestinians).

As Shafir pointed out, Peace Now has done good work exposing the inhumanity of the Israeli occupation, for example, by witnessing IDF abuse at checkpoints.  However, their raison d’être has always been to go back to the 1967 borders, create a token Palestinian state, and return to business as usual inside Israel as a Jewish state.  They ignore the mistreatment of Israeli Palestinians and oppose even discussing the right of Palestinian refugee rights to return, as an anti-Semitic notion, because, it would threaten the Jewish majority in Israel.

So, predictably, Shafir attempted to prove that a two-state solution is still possible, dismissing any other option. Most of his talk focused on showing how bad the occupation has been for both Palestinians and Israelis. He emphasized that it oppresses West Bank and Gazan Palestinians through what he calls “technologies of domination” such as checkpoints, the permit system, administrative detention, torture, deportation, and house demolitions. It has lasted so long, he believes, because Israel can’t legally annex the West Bank, and Palestinian resistance also makes it unfeasible. And, he explained, it has corrupted and “occupied” the entire politics of Israel. 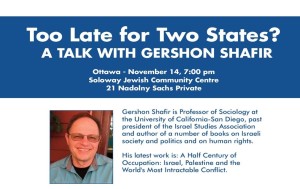 But Shafir was far less clear about how a two-state solution could be feasible or desirable. He distinguished between 6 types of settlements, military, religious, secular-suburban, Haredi, and unofficial outposts, but didn’t explain in what way this distinction is useful.  He showed data that the growth rate of settlers is declining (but still the settlement population is growing), especially in suburban type settlements. He says that many Israelis are now reluctant to move to settlements.  He also believes that many of the newly announced settlements may never actually be built because of bureaucratic obstacles, and that Israel’s recent draconian laws against even mentioning the occupation reflect its eroding legitimacy. He argued that a few settlements like Ariel could “easily” be removed as part of a land-swap to make a two-state solution work.

Gershon assumes that the goal is a two-state solution as envisioned under the Oslo Accords. But the so-called two-state solution never was a realistic or just solution for Palestinians.   Even in the ‘80s before settlement growth boomed, the proposed Palestinian state would be only 22% of historic Palestine, and it would not have been a true state, because the Oslo Accords would have not allowed it a military,  control over its water, or of its economy.

Now in 2017, a Palestinian state is even more of a figment of imagination. With settlements occupying 60% of the West Bank and all the best land, serviced by Israeli only roads and military check points dividing villages from each other, this so-called state would be a Swiss cheese array of isolated Bantustans. The entire spectrum of Israeli political parties and Israeli  public opinion is opposed to a Palestinian state.  And a two state “solution” also ignores the Apartheid structures inside Israel (which were exported to the West Bank in 1967) and the 5 million Palestinian refugees.

Likely because it’s so unrealistic, Shafir never spells out what he thinks this two-state solution would look like. Would Israel return the land (including land now on the other side of the Wall) to Palestinians or keep most existing settlements in place? Would it withdraw the Israeli military? Would it allow Palestinians to have a military or control over their economy or their water? What about Gaza?

He also declined to discuss how this two-state option might occur, aside from casually assuming that Israel would voluntarily sacrifice “a few” settlements. (Remember the uproar when Sharon removed settlements from Gaza.)  He doesn’t address how the increasingly intransigent Israeli government (with support from over 79% of Israeli citizens) would be convinced to abandon the occupation, or how the US and its European allies, which now uncritically support Israel, would agree. And although he mentions Palestinian “resistance”, he doesn’t approve of its call for boycott, divestment, and sanctions.  In fact, in 2013, he launched a counter campaign of “’personal’ sanctions against ‘Annexationist’ Israelis.

So, is it “too late for two-states?”  Probably.  Is it time to move on to a more realistic, just, and humane option, such as a binational, democratic state which respects the rights and security of both Jews and Palestinians?  Probably.