Sadhij Nassar, one of the leaders of the Arab Women’s Movement in Mandate Palestine wrote and spoke frequently against the British takeover of Palestine and its “Balfour Declaration”.  In 1939 she was imprisoned and later exiled for her determined opposition to Britain’s project. Read a special guest column by Grafton Ross…

SPECIAL GUEST COLUMN ON THE 100TH ANNIVERSARY OF THE “BALFOUR DECLARATION”

A large procession of women, many with babes in arms, winds its way through the streets of Haifa, stopping in front of government offices and foreign consulates, in a loud protest of the 17th anniversary of Lord Balfour’s Declaration. 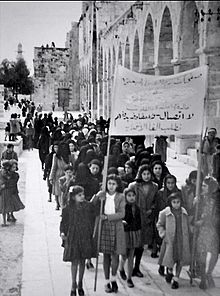 1930, Palestinian women protest in Jaffa against Britain’s decision to turn their country into a “homeland for Jews”

In Palestine, opposition to the Balfour Declaration was immediate and widespread.  So much so that, by the 1930s, British Mandate authorities had banned all public protests of the annual Balfour Day celebrations.

Cowed by the authorities, the Islamic Society in Haifa and the Arab Executive canceled plans for demonstrations to mark Balfour Day, calling instead for a day of silence. But the Arab Women’s Union of Haifa, with its secretary Sadhij Nassar in the lead, defied both the British and the Arab male leadership, and continued with their march.

Who was Sadhij Nassar and what was the Arab Women’s Movement?

The Arab Women’s Association was launched in October 1929 at the historic Palestine Arab Women’s Congress in Jerusalem, attended by more than 200 women from all over the country.  All the major cities and towns had fairly active chapters, although the ones that received the most publicity were the Acre, Haifa, Jaffa, Jerusalem, and Nablus branches.

Demonstrating a sophisticated understanding of the political dynamics of the day, the women’s movement deliberately played on the cultural assumptions of public opinion (both Palestinian and international), the male-led nationalist movement and the British colonial government – and manipulated them for their own ends.

One of their pamphlets, shaming their male colleagues into action, stated: “These women were the only ones who raised their voices against the government when some of the men were meeting with the district governor.”  And, playing on the British government’s self-image of embodying “British justice,” they sent countless letters and telegrams to officials, sympathizers in the British press, the League of Nations, Arab kings and heads of state – demanding action.

The Haifa chapter, established in 1930, was distinguished for its radicalism, resulting on more than one occasion in the arrest of its leadership.  And Sadhij Nassar, nominally the chapter’s secretary, was its driving force.

Sadhij was married to Najib Nassar, the editor and owner of al-Karmil, the first Palestinian newspaper to raise the alarm regarding the domination of the Zionist movement.  Beginning in 1926, Sadhij edited a “women’s page,” where she commented on a wide range of topics, including women’s activities locally, regionally, and internationally.  Encouraging women to raise their male and female children equally and to take up work to facilitate their economic independence, she urged women to get involved in politics, while avoiding factionalism in favor of unity.

Imprisonment and then a refugee in exile

Described by the British authorities as “a menace to public security” and accused of being “actively engaged in subversive propaganda,” Sadhij was arrested in 1939 and held in administrative detention (imprisonment without trial) for a year.  A British official commented: “a sojourn in a detention camp would be excellent. … Mrs. Nassar is an unmitigated nuisance and she should have been dealt with long ago.”  In 1940, authorities refused to grant al-Karmil a permit and closed down the paper.  But Sadhij continued to publish for another four years.

Sadhij Nassar continued her activities in the women’s movement until 1948, when she became a refugee.  Sadhij wrote for various publications in London and in Damascus, where she tried to open a branch of the Arab Women’s Union. She is believed to have died in Damascus during the 1970s.

Grafton Ross is a geographer and historian

He is Vice-Chair of Canada Talks Israel Palestine