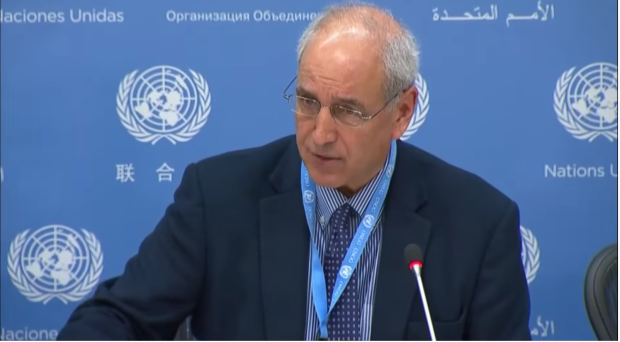 Professor Michael Lynk, of Western University Law school, is the UN Special Rapporteur on human rights in the Occupied Palestinian Territories. In his most recent report, he recommends to the UN General Assembly that it examine whether the Israeli occupation of Palestinian territory is still legal after 50 years. Read more…

Most of the media attention over Professor Michael Lynk’s most recent report to the UN as special rapporteur for the Occupied Palestinian Territories, has concentrated on the strong words he has used to describe the deteriorating situation in the West Bank and Gaza urging the Western countries to intervene.  He has been denounced by US Ambassador to the UN for urging that Western countries apply sanctions on Israel.

However, mostly overlooked has been the most innovative and potentially explosive element in the report – his recommendation that the UN examine the legality of Israel’s 50 year occupation of the Palestinian territories.

Since 1967, Israel has been repeatedly criticized by the international community for its violations of the 4th Geneva Convention. For example, UN Security Council 2334 condemned illegal construction of Israeli settlements in the West Bank and Jerusalem.

But all of those condemnations assumed that the occupation itself was legal.

However, in his most recent report, UN Special Rapporteur Michael Lynk has raised an interesting issue – when does an “occupation” become an “annexation”? After 50 years, is the Israeli occupation of the West Bank, really no longer an occupation, but an attempt to seize territory by force which is expressly forbidden by international law.

He recommends to the UN General Assembly that it commission a study to determine whether the occupation itself has now become illegal under international law.

The entire report is available from the UN here but here are a few excerpts:

The Legal Framework of Occupation

The Test as to Whether a Belligerent Occupation Remains Lawful

The Prohibition against Annexation

Will it matter? It is not clear whether the UN will, in fact, act on Lynk’s recommendations. (Israel denies it is occupying Palestinian land despite repeated determinations by world bodies to the contrary.)

However, Lynk’s argument takes the discussion about Israel’s violations of the 4th Geneva Convention to another level. Instead of criticizing Israel for specific violations of the legally accepted rules governing an occupation, Lynk calls into question whether the occupation has become de facto an annexation of a territory by force, which is explicitly forbidden by the constitution of the United Nations itself. If so, Israel’s right to be a member of the UN would be called into question. In fact, under Chapter 7 of the UN Charter, it might even require collective action by the UN members to stop an illegal act.