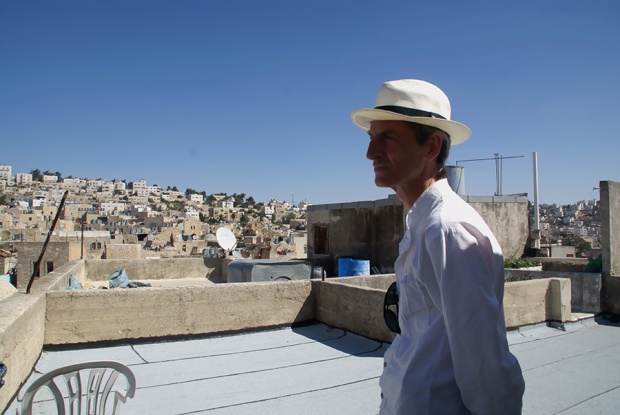 Robert Allison on a rooftop in Hebron. A Canadian Jew from Hamilton, he recently  travelled around Israel/Palestine. His fascinating blog, called “The Adventures of an Accidental Jew” is part travel guide, part poetry, and part introspection. He reflects on Israel/Palestine from the perspective of, as he calls it, an “accidental” Jew. Read my interview here.

I married a Jew. She had made career choices within the “Jewish World” that firmly stated she not be in a serious relationship with a non-Jew. She told me I would need to convert. I am secular, so what religion I am tagged with does not matter to me. I am Jewish by accident! At the same time, however, Jews the world over were born into the faith, the choice was not theirs – so they are also Jewish by accident.

This is my first time in Israel/Palestine.

My wife and I are both Palestinian human rights activists, and while she had lived in Israel/Palestine, I had never been. She wanted me to see what she had seen. I wanted to see what I had read or heard.

The first thing I did was to become an Israeli citizen. Jewish-Israeli citizens have more rights than anyone else who lives in or visits the country. Applying for and receiving citizenship (surprisingly easy if you can prove you are “Jewish”) was a way of assuring that should I have run afoul of the law in the course of advocating for Palestinians, I could not be deported and banned from returning to the country.

I wanted to follow through the citizenship process and be able to speak about it firsthand. By virtue of being Jewish, even though I have no connection to the country, I gain more rights than the people who have inhabited the land for centuries. This makes the so-called Law of Return the most racist law that I know of.

I also wanted to learn how the Zionist narrative is marketed.

In general, I really wanted to see and experience what I have heard in lectures and read. I wanted to have an experience I could share with others. I wanted to empower myself to speak truthfully and forcefully on what was or wasn’t.

I traveled freely, with the exception of various Israeli inhibitors, throughout the West Bank. I preferred to travel with Palestinians. Often I was passed from one Palestinian to another, total strangers, and each became host and appeared to feel a sense of responsibility for me until I was passed off to the next person. The Canadian Government advisory, like much of the government’s rhetoric, is unfounded. It also falls in line with Israel’s own approach, keep the people apart and in fear of each other. You can only dehumanize other people by never meeting them. I, unlike John Baird, was not pelted with eggs and shoes because I, unlike John Baird, was not in Palestine as an agent of the State of Israel.

Speaking of the Canadian Government, be it the current Conservatives or the Government that replaces them, what is particularly appalling from the perspective of my Canadian experience, is that the political class in Canada supports such a state as Israel. Canadian society would never openly tolerate such discrimination and oppression. Be it in Israel, Egypt or some other militarized society . . .

Just about every Palestinian I interacted for any meaningful amount of time, knew I was Jewish. Over and over, the Palestinians I met would volunteer, “It’s not Jews we have a problem with, it’s the settlers, or the killer settlers. It’s the Zionists that are the problem.” In this sense, I was perfectly safe and welcomed because I was not there to steal land, demolish homes, kill anyone, jail anyone etc. I was not there to impose my presence, dominate and force submission.

The response from the Canadian Jews that have read my blog has been very positive, but these are the Jews that feel much the way I do, the occupation is wrong, it’s barbaric, it’s inhumane and it goes against everything that Judaism teaches. Something that the Palestinians I spoke with understood.

As I mentioned earlier, one of the objectives was to experience firsthand. I ran into an Israeli I had met earlier in my stay, and he wondered how things had gone. I explained how appalled I was at the actions of the State and in particular, the treatment of one people by another. I told him that I felt it was my duty to go and share with as many people as I could, what I had seen and experienced during my stay. But I had to confess that I knew I had not seen or experienced the worst.