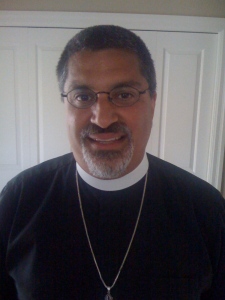 The Rev. Robert Assaly was ordained an Anglican priest 23 years ago in Ottawa. In 1992 he was sent to be the Director of the Middle East Council of Churches’ Jerusalem office. While there he was appointed Anglican Vicar of Gaza, returning to Canada after three years. He has been a member of the Church’s Middle East Working Group since the late-80s, and is Chair of Canadian Friends of Sabeel (CFOS). I interviewed him after his return from the Kairos Conference in Bethlehem, held in December 2014.

CTIP – Father Assaly, why did you go to the Kairos Conference this time? What was your objective?

I hadn’t been back for eight years, quite a long spell for me. Living there in the early 90s changed my life. I anticipate that much of my time the rest of my years will be devoted to striving for a just peace with reconciliation in Palestine. I went to become better informed, to renew and increase my understanding, so that I can be a more integrated and effective advocate.

CTIP – Who was there, and what were you discussing?

This was the Kairos Palestine (KP) 5th Anniversary Conference. In 2009, KP issued a document called A word of faith, hope, and love from the heart of Palestinian suffering. It was a grass-roots Palestinian Christian call out to the global church endorsed by all the Jerusalem Heads of Churches. It was a watershed moment having a profound impact on churches throughout the world. This conference in Bethlehem featured speakers from churches in Brazil, South Korea, India and South Africa. A brilliant young Bethlehem woman explained why BDS must go beyond just boycotting goods from the West Bank and bring pressure on Israel itself. It brought together over 300 people from abroad and locally. It was truly a moment of hope.

CTIP – I understand you also went to Gaza. How long did you go for? What for? What did you see/hear?

Yes, I was in Gaza for a couple of days. I have felt for years that it is important for visitors to make the effort to cut through the isolation of which Gazans are ever-conscious. It is both a show of solidarity and in a small way which Gazans really appreciate, an overcoming of the siege. CFOS raised over $40,000 for Gaza since the summer and so this was also an opportunity for our partners to give some context to the need.

In summary, I saw endless blocks of rubble in Shuja’iyya where thousands once lived, where a hospital once stood, in which children still played at great risk. I was struck by the flags planted in one rubble pile after the next, as a statement that they might be devastated but not defeated.  I heard the pain of an entire population imprisoned, besieged, attacked and slaughtered. I understood the frustration of being members of a community targeted simply because they are not Jews.

I circulated my observations under the title, When apartheid becomes a polite understatement.   I prayed with friends and colleagues in our Gaza church, restored after it was struck by an Israeli laser-guided missile.

CTIP – Back in the West Bank – how can you describe the mood today? Fear? Discouragement? Anger?

The summer’s devastation of Gaza seemed to have changed everything. Israel unabashedly lifted the veil, exposing its true colours, its attitude toward non-Jewish Palestinians. Compounded by the ever-expanding settlements seizing the best land, the two-state solution is now widely understood as mirage. People seem to believe that they are in for a long struggle, to cast off the yoke of apartheid. There is also a belief, a hope, that Europe is realizing the apartheid nature of the situation and will become increasingly uncomfortable with it, expressed in support for BDS, turning to international law, and other forms of non-violent resistance.

CTIP – Turning our minds to Canada, what do you think our most important challenges are with respect to Israel/Palestine?

I think there is a growing gulf between how Canadians and our government sees the region. The challenge is to be not intimidated by the recent bullying tactics of people like John Baird. He inked a deal with the Israeli government threatening Canadian BDS proponents, also a line taken by Steven Blaney at the UN, smearing the BDS movement as anti-Semitic. When CIJA, the Israel Lobby, went toe-to-toe with the United Church, trying to freeze them out of the national Christian-Jewish dialogue, all the churches stood together and stared down the Lobby, which ended the 40-year long adventure. As the Dialogue was the Lobby’s favoured instrument of intimidation in the churches, the Lobby was hoisted by its own chutzpah.

CTIP – Can you describe in a few words CFOS’ strategy for changing Canadian policy with respect to I/P?

CFOS doesn’t directly work at government policy. Rather we have put a lot of energy into facilitating conversation amongst the churches and church-related organizations. CFOS chairs a Forum which meets twice annually in response to the Kairos Palestine document. Since its inception, we’ve seen church resolutions on BDS, Christian Zionism and other steps forward. The Forum has brought together a coalition of Muslim- and Arab-Canadian organizations to inform and interact with the churches. And CFOS has numerous programmes to educate the public, not least our co-sponsorship of the just completed national tour of Jeff Halper.

CTIP – Can you say a word about your upcoming conference on Christian Zionism in  Vancouver?

CFOS is organizing a conference in Vancouver, April 23-25, Seeking the Peace of Jerusalem:   Overcoming Christian Zionism in the Quest for Justice.

With support of our American Friends of Sabeel, we have a stellar line-up of speakers from Palestine, the US and Canada. There will be lots of interaction and workshop time, focusing in large part on BDS.  We’re hoping for endorsements from a broad range of organizations. It will provide an opportunity additionally for networking and building action coalitions.