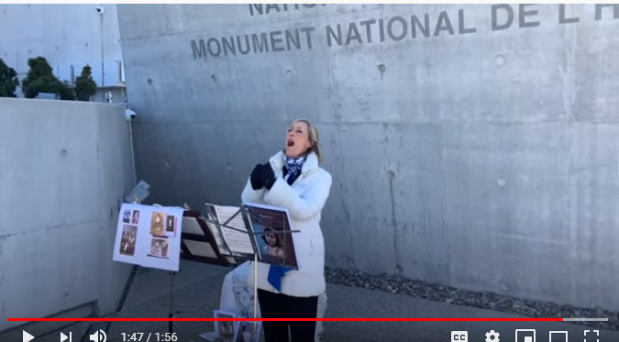 Holocaust Memorial ceremony in Ottawa on April 21st. Canadian Jews remain traumatized by the memory of the 6 million Jews who were deliberately murdered by Nazis. A recent survey of Canadian Jews by the Environics Institute shows the memory of the horrors of the Holocaust looms large in their attachment to the State of Israel. But it also showed some surprising differences between Canadian Jews and their American counterparts.  Read more…

There are about 400,000 people in Canada who identify as Jews, or about 1.2% of the total Canadian population. 82% of them are concentrated in 4 Canadian cities: Toronto, Montreal, Winnipeg and Vancouver. Canadian Jews tend to be well off (though not all), well educated and well connected. Jews make a considerable contribution to Canada in many fields including arts, culture and education.

The strong attachment of the majority of Canadian Jews to the idea of a Jewish State, and their political and economic importance in Canadian society make the “Israel lobby” an important factor in Canadian foreign policy – particularly with respect to the middle east. Those who would like to change Canadian policy toward a more “balanced” approach can benefit from a deeper understanding of the “Jewish experience” in Canada.

A landmark study of Canadian Jewry carried out by the Environics Institute for Survey Research, published in March last year, has 84 pages of interesting information about Jewish identity, religious practice, experience with discrimination, intermarriage and feelings toward Israel, among other topics.

It paints a portrait of a community that is educated, cohesive and urban. It has markedly lower rates of intermarriage and assimilation than in the United States. But it remains fearful of anti-Semitism and retains strong emotional connection to Israel.

At a recent public meeting at the Jewish Community Centre in Ottawa, Dr. Keith Neuman, Executive Director of the Environics Research Institute reviewed some of the key findings. Some of the findings were particularly interesting for those interested in understanding (and influencing) the attitudes of Canadian Jews with respect to the Israel/Palestine issue.

Please find below a listing of a few of the interesting findings (the report lists more than 25 in all) complete with excellent graphs. A good deal of the text below is taken directly from the clear explanations in the report itself with a minimal editing by CTIP 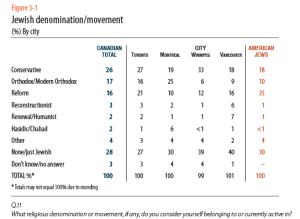 There are several different Jewish denominations of which the largest are called “Conservative”, “Orthodox”, “Reform” and “Reconstructionist”. For a discussion of the history and differences, better refer to Wikipedia or your favorite source.

In Canada, the Conservative Jewish denomination is the strongest. This is in marked contrast to the US, where Reform is considerably stronger. 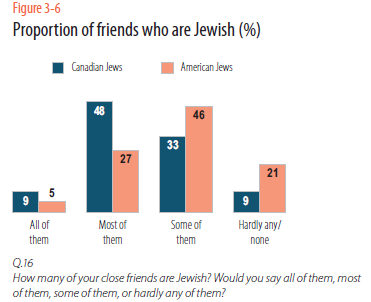 Canadian Jews have a high tendency to form friendship with other Jews. “Jewishness” appears to be more important to Canadian Jews than “Catholicism” is to Catholics or “Anglicanism” is Anglicans.
Apart from formal membership and affiliations, being Jewish is felt to be about social connections with family and friends.

More than half report that either all or most of their current friends are Jewish, compared with those who say only some, hardly any or none of them are Jewish.

As with many other aspects of Jewish life covered in this survey, American Jews are much more open to forming friendships non-Jews; only one-third of American Jews say that all or most of their friends are Jewish.

The vast majority of Canadian Jews have two Jewish parents and were brought up in the Jewish religion. This is in contrast to the experience of American Jews, who are much more likely to have “mixed” parents.

Membership in the Jewish religious community is based primarily on parentage (usually the mother)  — unlike other world religions, in which membership is unrelated to ethnicity. 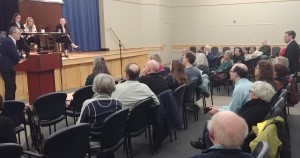 On March 4th, Dr. Keith Neuman of the Environics Institute outlined the results of a new study into the “Jewish experience in Canada” to a predominantly Jewish audience in Ottawa

Like many other ethnic groups, Canadian Jews continue to worry about being assimilated. When shown statistics on the frequency with which American Jews “marry out” (i.e. marry a non-Jew), (“I have hundreds of assimilated cousins in the USA“, noted Newman), the audience of Ottawa Jews showed some concern.  There was discussion about whether this trend would eventually come to Canada, and how to stop it

In a follow up discussion with one of the panelists, I asked whether she thought Jews would also feel concern if told that young Muslim Canadians were to start assimilating into the mainstream. “Probably not,” she said, explaining that “the post-holocaust Jewish fear of extermination (among Canadian Jews) motivates a strong desire to keep the group intact.”

Being Jewish in Canada often means participating in “Jewish education”. This can include attendance at an overnight summer camp, or Hebrew school or Sunday school. Close to one-half of Canadian Jews have attended a Jewish day school or yeshiva and have done so for an average of nine years.

Just over four in ten adult Canadian Jews report having attended one of these types of schools. This is almost twice the proportion of American Jews with a similar experience.

A panelist at the Ottawa event noted that Jews who do 7 years of Hebrew school are far less likely to “marry out”. By a show of hands, at least 2/3 had either attended Hebrew school or a Jewish overnight summer camp. Several remarked that it had been a formative part of their youth. 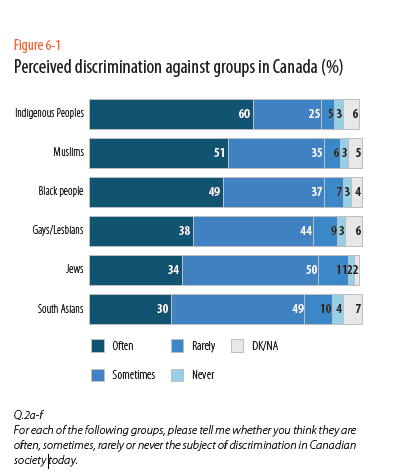 Most Canadian Jews claim to be “liberal” in their political values.

Canadian Jews are much more likely to recognize discrimination experienced by Indigenous Peoples (60%), Muslims (51%) and Black people (49%), and to a lesser extent gays and lesbians (38%) than is the general Canadian population.

The survey examined perceptions of the frequency of discrimination experienced by Jews, as well as that of five other marginalized groups in Canada as a basis of comparison. These results can be compared with the views of the population at large through other Environics Institute research.

Many Ottawa Jews have been involved in a range of human rights/anti-discrimination activities, including being active in welcoming (mostly Muslim) Syrian refugees, for example.

But on the other hand, at the Ottawa meeting there was also a recognition that being Jewish in Canada today is a considerable advantage. “My Judaism confers a white privilege on me”, noted one of the panelists.

Some of Jewish perception of discrimination against Jews may relate to the Israel/Palestine situation. In recent years, the actions and policies of Israel have attracted criticism from outside the community (and have even divided Canadian Jews).  This situation has put many Jews in an uncomfortable position when these issues become a topic of conversation or debate. A significant proportion of Canadian Jews say they have been criticized for defending actions of the State of Israel in the past 12 months. (Of course, the reverse can also be true. Jews who are seen to criticize Israel too strongly can be accused of being “self-hating” by other Jews.) 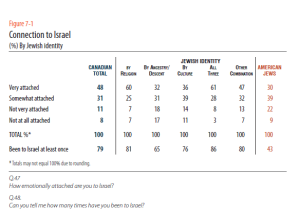 Almost half of Jews in Canada say they are very emotionally attached to Israel, with another three in ten somewhat attached, and only one in five feeling not very attached at all.

Most have visited the country at least once, with many having made multiple trips.(This identification with Israel was evident at the meeting itself held in the Solway Jewish Community Centre (JCC) decorated with equal numbers of Israeli and Canadian flags.)

By comparison, only 30 percent of American Jews say they are very attached to Israel, with an equal proportion who feel not very or not at all attached. 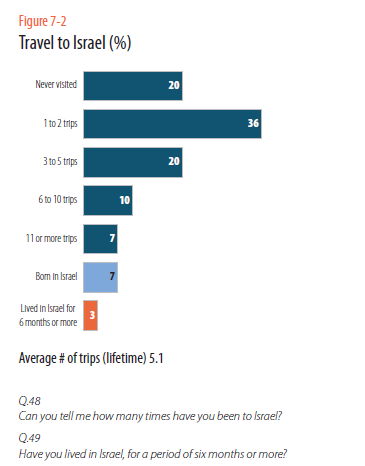 For many Jews, attachment to Israel is reflected in time spent in the country.

Eight in ten Canadian Jews say they have visited Israel at least once. Many  have been to Israel three or more times.

By comparison, only four in ten American Jews have ever been to Israel.

Among those who have visited the country at least once, one in five lived in Israel for a period of six months.

Another seven per cent of Canadian Jews report being born in Israel, although their reasons for leaving and moving to Canada were not recorded.

How do Canadian Jews view the Israeli and Palestinian governments? Regarding the Israeli side only 35 percent believing the current Israeli leadership is making a sincere effort to bring about a settlement, compared with 44 percent who disagree, and another 21 percent who have no clear opinion.

There is considerably more agreement among Canadian Jews about the current Palestinian leadership, with only seven percent saying it is making a sincere effort for peace, compared with 76 percent who disagree and another 18 percent who do not express a clear opinion.

Nearly half of Canadian Jews really think “God gave the land of Israel to the Jewish people”. The other half don’t agree or aren’t sure.

One of the central obstacles to any resolution of the Israel/Palestine conflict is the belief that God gave the land of Israel to the Jewish people. Canadian Jews are evenly divided on this. Forty two percent say “yes”, and forty one percent don’t believe this is literally true. The remaining 17% do not express a clear opinion either way.

Not surprisingly, belief in the land being granted by God is most widely held among Jews who are Orthodox/Modern Orthodox (75%)

The relatively self-referential nature of the Jewish community in Canada is reflected in its education and friendship patterns, its post traumatic fears about the Holocaust (and a possible resurgence of anti-Semitism), and its consensus around the necessity of having a Jewish State. That near consensus among 400,000 Canadian Jews explains in large measure the effectiveness of the so-called Israel lobby in shaping Canadian public opinion and public policy towards a pro-Israel position. (There is nothing comparable in Canada on the Palestinian side of the equation.)

Not all Canadian Jews agree with Zionism of course. But the Environics survey seems to support the notion that the overwhelming majority of Jews feel very attached to the idea of a “Jewish State” – even if they might have strong criticisms to make of some of the actions of the Israeli government.

A deeper appreciation of the “Jewish Experience” will help non Jews understand what Canadian Jews think and why they think it. Those who would like to change Canadian policy toward a more “balanced” approach on the Israel/Palestine issue should check out the “2018 Survey of Jews in Canada”, by Environics Research.