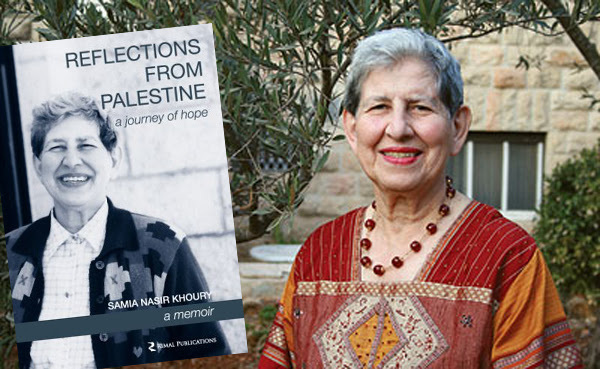 There once was a time in which Christian, Muslim and Jewish Palestinians were neighbours and friends, remembers Samia Khoury. That was before the establishment of Israel in 1948. Since then, Israel has not let anything, even the coronavirus pandemic, get in the way of its ongoing dispossession of the Palestinian people. Mrs. Khoury is the former president of the Palestinian YWCA and member of the Beirzeit University Board of Trustees. Read her letter about what Israel is doing this Easter under the cover of the COVID crisis. …

“While the United Nations Secretary General is calling on all countries to silence the guns and focus on collectively saving humanity from this vicious pandemic that is ravaging societies around the globe, Israel finds it very timely to increase its oppression of the Palestinians under occupation.

“A few days ago Israeli soldiers raided Ramallah creating havoc in the middle of the night.  A week ago they continued demolishing homes in the suburbs of Jerusalem and  other parts of the West Bank. And on the second of April, the police  raided the house of  Fadi Hidmi, the Palestinian minister in charge of the affairs of  East Jerusalem,  blasting the gate to his garden and breaking into his  house, as well as confiscating the money he had at home..

Samia Khoury was born into a well-off and educated Palestinian Christian family before Israel was created in 1948. She remembers a time in which Christians, Muslims and Jews were friends. The creation of the State of Israel has changed all that.

“Not only does Israel seize the opportunity of this world crisis to further harass the Palestinians, they always choose the night hours for their raids.  Why I wonder?  It seems to me that thieves are the only people that need to be protected by the dark  hours of the night  to do their illegal actions.

“The Police in Jerusalem know very well that the Palestinians in East Jerusalem are practically under curfew and they have complied by staying at home.  So they could have easily picked up Mr. Hidmi during the day time without scaring the family and causing extra stress to the community that is already being deprived of its basic rights.

“The only charge against Mr. Hidmi is that he is trying, with his colleagues, to alleviate the suffering of so many people who have lost their daily bread due to the current crisis which has not spared either Palestinians or Israelis.  And that is why the police has also been  harassing all the young volunteers of the Old City of Jerusalem and confiscating the aid in kind that they are trying to deliver to needy families.

“Will the Corona pandemic be a good enough lesson for all of the world leaders and citizens?  Actually, it is in time of crisis and the way one reacts to fellow world citizens that one’s true character is revealed.”