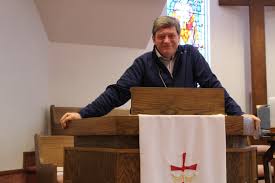 Reverend Steve Berube of St-Paul’s United Church in Riverview, NB. has been in Palestine several times. In 2018, he frequently visited Ofer Prison where Palestinian children are tried in Israeli courts. He also visited hospitals where other children are being treated as a result of injuries inflicted by Israeli police or military forces. In a painful personal letter to Prime Minister Trudeau and Foreign Affairs Minister Champagne, he explains why boycotting Israel has nothing to do with anti-Semitism and everything to do with human rights. Read his letter (reproduced with permission) here. ….

I wish to join you in condemning anti-Semitism and all forms of religious and ethnic hatred around the world. I have worked hard on these issues for over 25 years as a United Church of Canada minister.

It was a privilege for me to live in Bethlehem and visit Jerusalem frequently in 2013. Many suspect my strongest memories are of the Church of the Nativity, the Dome of the Rock, the Western Wall or other scared sites. They are wrong.

My strongest memory from Bethlehem is of sitting in a hospital next to 14 year old Mohamed Kurdi who had been shot by an Israeli sniper in the abdomen. One of his doctors told me he had never seen as many internal organs damaged by a single shot caused by a “dum-dum” bullet.

15 year old Fathi Saleh in hospital in Bethlehem after being shot in head by Israeli soldiers.

My strongest memory from Jerusalem is of a hospital room with 15 year old Odai Nael Fathi Saleh who was in a vegetative state as a result of being shot in the head by an Israeli sniper in Bethlehem. Doctors said they would never be able to remove all the bullet fragments. I remember his family’s outrage when authorities presented them with a bill for 25,000NIS for his treatment due to an Israeli soldier shooting him.

Both of these children were innocent bystanders posing no threat to any Israeli. But their images will forever haunt me.

Gideon Levy’s recent column in Haaretz focused on an Israeli military spokesperson who said it is appropriate to shoot children. Apparently, what was condoned by Israelis in my time continues today.

In 2018, I visited the Israeli military courts in Ofer Prison. Each year, 500-700 Palestinian children face these courts that have a conviction rate of over 99%. Over 75% of Palestinian children report being abused or tortured while in Israeli custody awaiting trial.  Please try to imagine, the fear a child you know would experience after spending two or three nights alone in prison, most likely enduring torture or physical/psychological abuse and having no access to their family or legal counsel before entering a military court where the court officials speak a language the child does not understood. Would you wish this on the child you thought of or any child? Should these practices not be condemned?

I cannot unsee what I have seen. Day after day, I witnessed the abuse of Palestinian human rights and violations of the 4th Geneva Convention by Israeli officials including innocent children being shot and their lives being ruined. Therefore, my perspective is radically different from the dominant narrative about Israel and Palestine that recent statements by your government portray.

As a human rights advocate and peace activist, can you help me understand why on Feb. 6, Minister Champagne rose in the House to condemn the peaceful, nonviolent BDS movement and linked it to antisemitism?

BDS is a form of free speech that calls attention to the egregious actions of the Israeli government and its daily violations of International Human Rights laws, the 4th Geneva Convention, along with ignoring motions adopted by the UN Security Council and the judgments of the International Court of Justice. Linking BDS to anti-Semitism is an attempt to delegitimize the valid criticism of Israel over its documented human rights violations against Palestinians. Further, linking BDS and antisemitism deepens prejudice against Palestinians and those who support the rule of law and international treaties.

Your government prides itself on supporting international human rights. Yet, you often seem to fail to criticize Israel for its ongoing violations of its responsibilities as an occupying power and as a high contracting party to the Geneva Conventions. Can you help me understand why your government seems to be progressive on most human rights issues except for joining the vast majority of countries who speak out on behalf of Palestinians who have lived under the longest occupation since WW II?

Please join with me and other human rights supporters in working to eliminate anti-Semitism as well as the prejudice stoked by those who unjustly criticize Palestinians.

I look forward to your reply.