Young men and women in an English literature class in one of Gaza’s 6 universities.  Well educated, but no jobs and no future. Want to leave Gaza? Can’t – Israel won’t let them. Nearly 2 million people are trapped in Gaza – blockaded by air, sea and land. The world treats them as if they were “just numbers”. Do you know the name (or story) of even one of them?  Here is one organization that wants to help young Palestinians tell their story to the outside world. It appeals to individual Canadians for help. Read more.

The heart-wrenching image of the body of 2 year old Alan Kurdi did more to focus Canadian attention on the issue of Syrian refugees, than all the stories about the difficulties of millions of refugees displaced by the war.

“A single death is a tragedy; a million deaths is a statistic”, Joseph Stalin is alleged to have said during WWII. Whether he actually said this or not, it is true that we react emotionally to individual human stories, but when the numbers start to add up, the emotional impact tends to be obscured.

Between March and May 2018, Israeli forces killed or wounded thousands of young Palestinians in Gaza. The slaughter continues. But the tragedy in Gaza doesn’t lie solely in the numbers. It lies in the individual stories.

This is the idea behind We Are Not Numbers (WANN), a small NGO run by a collective of young Palestinians trapped in Gaza by the Israeli blockade.  Founded in 2015, it aims to help aspiring young Palestinians to learn to write in English and get their stories circulating in the West by electronically “leaping over” Israel’s stifling blockade. It provides a way for them to tell their personal stories to the outside world. 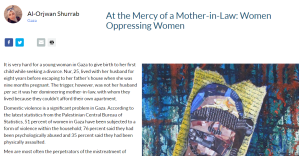 On the WANN website are over 700 stories written in English by young Palestinians stuck in Gaza. They range from the humourous, to the philosophical to the deeply personal. Stories about boys and girls growing up and about personal loss.

One touching story “Living as a little man” is by Ahmed Majed Lulu, a young man born with dwarfism, and his life as a “dwarf” in Gaza.

Another is about domestic violence, by men, and by women against other women.  Each one gives an insight into life in Gaza today.

WANN also produces short videos. One video “Six Miles Out,” is an 11-minute documentary on the plight of Gaza fishermen. Slow moving and powerful, it was chosen as an official selection for, and screened at the Nice International Film Festival. It also won several other international awards.

WANN is a shoestring organization. They mostly rely on a few full-time staff and a host of volunteers. WANN is in the middle of a fundraising drive trying to raise $25,000 US. It is just one of many Palestinian initiatives that deserve support.

I spoke to Ahmed Alnaouq and Assma Tayeh, two staff members of WANN about why they need the money, and why they are appealing to individual Canadians. (NOTE: internet connection to Gaza is not reliable and often intermittent, which affected this short interview.  There is a 20 second pause at the 4:50 min mark before we reconnected and said goodbye.)

HELP WANTED – PLEASE LISTEN TO US!!!

Israel imposes the draconian blockade on Gaza because it hopes that the people will turn against the Hamas government. This “collective punishment” is illegal and has caused tremendous hardship, but it hasn’t worked so far. The evidence is that it just makes these brave youngsters more determined than ever to reach out to the outside world.

Young people in Gaza want to show the world that they are just that – young people!!