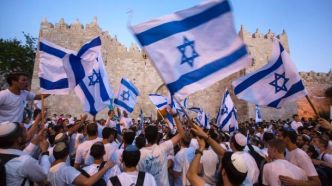 Jewish Canadian David Kattenburg was appalled as he watched right wing nationalist Israeli fanatics (left) sing and wave Israeli flags in front of the Damascus Gate (in occupied Palestinian Territory) a few days ago. On the same day, another Canadian, this one of Palestinian origin, watched Israeli police storm into the Al Aqsa mosque using tear gas to disperse Muslim worshippers. “This is what fascism looks like”, said Kattenberg. Read more and see videos.

Two Canadians, one Jewish and one Muslim, got a close look at different sides of the ugly face of fanatical Jewish racism on “Jerusalem Day”, which this year fell on June 3rd according to the Jewish calendar.

Jerusalem Day is an Israeli national holiday commemorating the establishment of Israeli control over East Jerusalem in the aftermath of the June 1967 Six-Day War. The day is officially marked by state ceremonies and memorial services.

After being a multi cultural, multi religious city for centuries, Jerusalem was dramatically changed in 1948 when Zionist forces captured the western third of the city, expelling the non Jewish residents and declaring Jerusalem as the capital of the new State of Israel.

For the next 20 years, Israel controlled West Jerusalem (now completely Jewish), but it was unable to take over East Jerusalem (including the Western Wall and the Al Aqsa Mosque) which was under Jordanian control.

In the 6 day war, however, Israel took over the rest of Jerusalem, putting its Palestinian citizens under Israeli control.

Every year, thousands of Israeli Jews celebrate this event, and Israeli right wing fanatics use Jerusalem Day demonstrations as a way to forcefully show to the Palestinians (Muslim and Christians) that Jerusalem is now a city for Jews. Demonstrations are held at the Damascus Gate, the main Palestinian entrance to the Old City followed by a loud parade through the Old City and finally arriving at the Western Wall.

David Kattenburg, a Canadian Jew from Winnipeg was there and watched appalled as young Jews (many apparently American) wildly celebrated Jewish control over East Jerusalem (and domination over the Palestinians), under the protecting eye of Israeli soldiers.

(If you are on Facebook check out David’s posts on June 2nd and 3rd from Jerusalem.)

CTIP reached Kattenburg a couple of days later for a video interview about what he saw in Jerusalem.

Meanwhile at the Al Aqsa mosque….

At almost the same time, Israeli soldiers were entering the Al Aqsa mosque, using tear gas and noise makers to disperse the crowd which had come to pray at the end of Ramadan. Unarmed Palestinians responded by chanting “Allu Akbar” (God is Great) and throwing anything they could get their hands on (rocks, chairs, shoes) at the police.

A Canadian Palestinian was there and sent me a 19 minute video. (It is not his video, but he was in the Haram Al Sharif while these events took place.) He is reluctant to give his name because of possible Israeli repercussions on him or his family.

When the soldiers entered the compound where Palestinians were gathered, praying and singing, they “began throwing chairs at the door to keep the soldiers outside,” he said to me.

(Disgracefully, Israelis wouldn’t know anything about this. Israel Hayom, the most widely read newspaper in Israel, reported the incident as a “Muslim riot” which they claimed was put down by police.”

This year, as Kattenburg explains, the police cleared the square of journalists or anyone with a cellphone, so the record of what happened is limited. However, in 2015, some journalists were able to follow the young Jews hoodlums as they paraded through the narrow streets of the old city, shouting anti Arab slogans, while Israeli police protect them. The Palestinian shopkeepers are forced by police to close up their shops in their own city while the march comes by.

What to make of this?

Canadians are led to believe that the conflict between Israel and the Palestinians is one of two sides who hate each other and won’t make peace. The videos from the Damascus Gate and outside the Al Aqsa mosque seem to tell a different story – one of Israeli fanatical determination to demonstrate exclusive Jewish control over this historic and multicultural city, intimidating Palestinians and trying to force them to submit to the idea of Israel as a “Jewish State”.

Final comment. As we noted in last week’s post, Canada, which says it recognizes East Jerusalem to be Occupied Palestinian Territory, and which prides itself on human rights, tolerance and multiculturalism, has so far not made the slightest comment about these blatantly racist events.