The ongoing process of “Judaizing” Jerusalem – transforming the historic multi-cultural and multi-religious city into an ethnically pure Jewish city – has picked up speed. Since the Trump administration’s announcement recognizing Jerusalem as the “Capital of Israel” and moving the US Embassy there from Tel Aviv, Israel has intensified both the demolition of Palestinian houses and the construction of new housing for Jews in East Jerusalem.

“Demolitions (of Palestinian houses) in East Jerusalem have increased at a staggering pace over the last month,” reported the UN Office for Coordination of Humanitarian Affairs.

Although the beleaguered Palestinians of East Jerusalem are putting up determined resistance, they appear unable to reverse the process. Israel prohibits the Palestinian Authority from intervening in East Jerusalem, and makes organizing at the community level very risky. Meanwhile, Israel has the explicit backing of the USA, and other western countries turn a blind eye.

Some Western countries have raised an alarm, but have yet to take any concrete steps.

So far, Canada’s Minister of Foreign Affairs, who has loudly touted her attachment to the “rule of law”  has not had the slightest word to say about the intensified ethnic cleansing of Jerusalem or new house construction for Jews only in East Jerusalem, a process which is recognized by the United Nations Security Council as “illegal”.

Judaization of Jerusalem is not a new phenomenon, according to B’selem, an Israeli human rights organization. B’tselem dates it back to 1967, when Israeli forces completed its takeover of historic Palestine by capturing the West Bank, including Arab East Jerusalem.

Engineering a Jewish majority by driving out Palestinians

“Judaization has been Israel’s policy ever since the occupation began and East Jerusalem annexed. Israel has devised legal excuses to gradually empty East Jerusalem of Palestinians. It refuses to draft zoning plans that would allow construction. So, just to have a roof over their heads, Palestinians are forced to build without permits. The authorities then demolish their homes for being built “unlawfully.” Since 2004, Israel has demolished at least 848 Palestinian homes in East Jerusalem. At least 2,960 people, including 1,596 children, have lost their homes. The threat of demolition looms over the homes of tens of thousands of others. Demographic majority for Jews, demolition for Palestinians.”

(The Israeli Information Center for Palestinian Rights in the Occupied Territories) 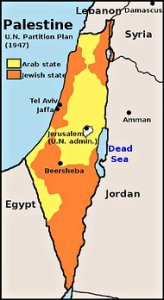 But others would date the process back earlier, to 1948 when Israel, ignored the UN resolution which partitioned Mandate Palestine into 2 states AND ALSO provided for an independent Jerusalem under UN control (see map). Instead, Zionist militias took over about 1/3 of Jerusalem and expelled the Christian and Muslim inhabitants to make West Jerusalem a city for Jews only.

What happened in Jerusalem in 1948?

85 year old George Baramke and his sister Laura, from a wealthy middle class Jerusalem Christian Palestinian family still remember quite clearly what happened to them when Jewish forces expelled them from their Jerusalem home. (Watch the short videos below.)

At least the Baramke’s were not killed outright, as was the case in the little Palestinian town of Dir Yassin, on the outskirts of then Jerusalem. On April 9, 1948, over a hundred villagers were killed by Zionist militia forces.  News of the Dir Yassin massacre incited panic in the Arab towns around Jerusalem, And note that all of this occurred while Palestine was still under British control and before war broke out between Israel and the Arab States a month later.

(Laura Baramke Khoury interviewed in the home of her sister in law. Apologies as ends a bit inelegantly when cake is brought out for the interviewer… )

What about Andrew Scheer?

Scheer says if his party forms the government in 2019, it will follow Donald Trump’s lead and recognize Jerusalem as the capital of Israel. Scheer’s declaration comes in the form of a pledge posted to the Conservative party website designed to gather signatures from members of the public.

“Canada’s Conservatives led by Andrew Scheer will recognize Jerusalem as Israel’s capital when we form government in 2019,” the pledge says, describing the party as “a strong voice for Israel and the Canadian Jewish community.”

Had he wanted to be even more forthright, Scheer might also have added that Canada’s Conservatives will be a “strong voice for the ethnic cleansing of Jerusalem”.