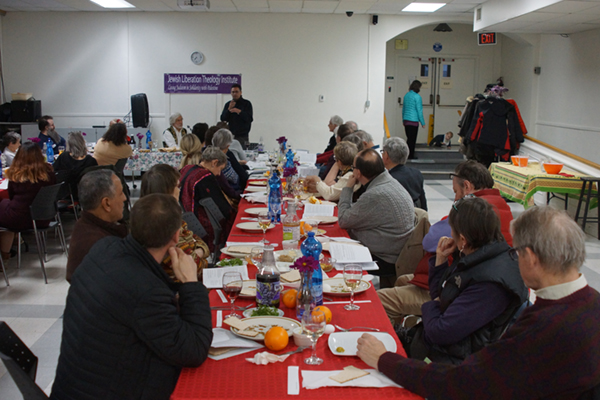 At Passover Jewish families celebrate with a ritual family dinner called a “Seder” at which the story of the liberation of the ancient Hebrews from oppression in the land of Egypt is recited. A Hamilton Ontario Rabbi invites Jews and non-Jews to come to a Seder with a modern twist. Read more.

At Passover Jewish families celebrate with a ritual family dinner called a “Seder” at which the story of the liberation of the ancient Hebrews from oppression in the land of Egypt is recited. It is customary among Jews to invite guests, both Jewish and non-Jewish, to join their Passover celebration.

Our Liberation Seder draws on the legacy of a historical figure – Rabbi Akiva – who used the Pesach Seder to plan a revolutionary struggle against the Romans.

As modern Jews committed to current liberation struggles, the ritual of the Seder gives us an opportunity to contend not only with legacies of oppression but also with current suffering that we survive, that we perpetrate and in which we are complicit.

We have been conducting liberation Seders since 2009 for Jewish activists in Ontario who work for justice in Palestine, and who are estranged from the organized Jewish community.

What happens in the Liberation Seder?

We always have all participants sit at the same table. During the Seder the leader reads the Haggadah and asks for volunteers to read certain paragraphs. We do all the required rituals and then we eat specific items each of which has a symbolic meaning.

As allies in the struggle for liberation of Palestine, we take our lead from the Palestinian people. The story of the struggle for liberation of Palestine is therefore told by Palestinians. We normally have a Palestinian speaker to talk about the theme of the Seder. This year the theme is two folded: the Great March of Return (since it started on the evening of the first night of Passover last year) and Palestinian Political Prisoners Day (which is commemorated on April 17th).

Our Seders are dedicated to a free Palestine and the liberation of all peoples. And YOU are invited! Come join us. You can find out more at http://jelithin.ca/

CTIP guest columnist Rabbi Lucia Pizarro is the spiritual director of the Jewish Liberation Theology Institute in Hamilton, Ontario. She was born in Mexico City, where she became qualified to practice law. She completed an M.A. and a Ph.D. in Philosophy at the University of Essex in the UK. She followed her academic passion for Jewish thought with four years working for social justice in Palestine. She recently became a mother and a Rabbi.

Canada Talks Israel Palestine (CTIP) encourages and accepts guest columnists to promote a thoughtful discussion among Canadians on the Israel/Palestine issue, including a well informed and sensitive discussion about solutions. CTIP encourages serious people who disagree with any column to make comment. Disagreements respectfully offered are welcome. To learn more about what CTIP does, contact us at chair.ctip@gmail.com.