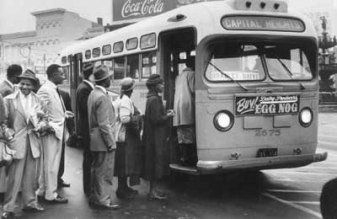 From California grapes to South African oranges to Montgomery’s buses – boycotts are a respected tradition in America as a non violent way to promote change. The right to promote a boycott is protected by the US constitution which protects freedom of speech. But what about BDS – the movement to boycott Israel? Attempts to make it illegal have prompted a growing debate in the US over freedom of speech. Read more.

In 2003, because of France’s opposition to the US invasion of Iraq, there was a brief move in the US to boycott French products and even to rename “French Fries” as “Freedom Fries”. As recently as 2017, North Carolina faced the threat of a domestic boycott over a law restricting bathroom use for transgender people. And of course today the USA officially boycotts or has sanctions on dozens of countries ranging from Iran to Cuba to Venezuela and Russia. Boycotts, it seems, are as American as cherry pie.

However, a powerful pressure group has been lobbying Congress and State governments to ensure that BDS (Boycott, Divestment and Sanctions) the main movement to bring pressure on Israel, is blocked.

But the attempt to protect Israel at the expense of limiting constitutional freedoms is increasingly raising eyebrows and starting to cause resistance from mainstream Americans. A recent editorial in the New York Times warned Americans that: “The anti-B.D.S. initiative (…) is part of a larger, ominous trend in which the political space for opposing Israel is shrinking“.

A small town in Texas becomes a flashpoint

The recent decision of a small Texas school board to not renew the contract of a mild mannered speech pathologist because she would not promise to “not boycott Israel”, has drawn national and even international attention.

Glenn Greenwald, writing in The Intercept, explains that Bahia Amawi, a U.S. citizen,  has been told that she can no longer work with the public school district, after she refused to sign an oath vowing that she “does not” and “will not” engage in a boycott of Israel or “otherwise take any action that is intended to inflict economic harm” on Israel. The Intercept article included this short video.

The firing even promises to end up as a test of the US Constitution’s first amendment which guarantees “freedom of speech”.

The school board says it is only following Texas law. But the American Civil Liberties Union of Texas has already filed a lawsuit against state officials and university systems saying that a law ordering all government contractors to state that they do not participate in boycott of Israel is a violation of their free speech. Amawi’s mild manner (she says she has not been a member of any movement, but is just moved by what she thinks is the “right thing to do”) makes her a sympathetic client.

The Texas decision is the tip of the iceberg. According to Palestine Legal, a US based organization which “protects the civil and constitutional rights of people in the US who speak out for Palestinian freedom”, there are now 16 US states which have some kind of legal interdiction of boycotting Israel. (See “red” states in accompanying map.) 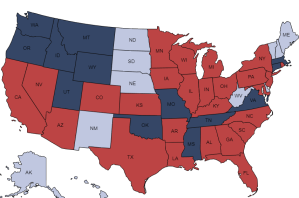 Not surprisingly, staunchly pro-Palestinian organizations  like Palestine Legal, the US Campaign for Palestinian Rights, Jewish Voice for Peace, etc.  have been raising a red flag about the threat to the freedom of speech guaranteed in the First Amendment.

However, as the lobby continues its attempts to smother criticism of Israel, it is facing broader public attention and growing resistance, even from people and organizations which do not necessarily support BDS itself. In addition to the NYT’s editorial cited above, the issue has also received attention from mainstream organizations like CNN, The Los Angeles Times, and Independent Global News’s program Democracy Now.

Some liberal Zionist organizations, concerned about a possible backlash, have come out against trying to criminalize BDS. “We are strongly opposed to any legislation at the federal or state level that seeks to criminalize or penalize BDS activities,” said Logan Bayroff, a spokesman for J Street, an American pro-Israel group which supports a two-state peace solution.,

Will the more rabid elements of the Israel lobby get their way, and actually convince lawmakers to make it illegal to boycott Israel – and only Israel? Or will the growing resentment and opposition to this attack on freedom of speech blow it away? Its too early to tell for sure, but there are encouraging signs. The lobby seems to be losing in the court of public opinion, and it seems very likely that it would lose before the US Supreme Court when it gets there.

The Israel lobby has been active in Canada trying in a similar way to derail the growing BDS movement here. It has succeeded in getting motions passed in both the Federal and Ontario parliaments condemning BDS in strong terms.

But making it illegal? No. Even Parliamentarians who are uncomfortable with BDS agree that the movement is legal and non violent. The lobby will have a lot of difficulty trying to convince the Canadian public (and our politicians) that there is anything anti-Semitic or morally wrong with a legal and non-violent method of applying pressure on Israel.

Canada Talks Israel Palestine (CTIP) encourages a thoughtful discussion among Canadians on the Israel/Palestine issue, including a well informed and sensitive discussion of Zionism itself. CTIP accepts guest columnists and encourages brief comments (under 100 words) from serious readers. To learn more about what we do, contact us at chair.ctip@gmail.com.