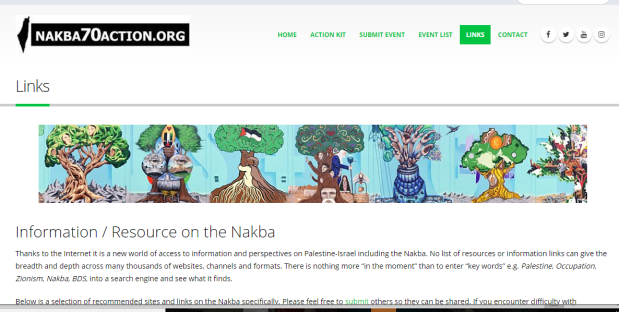 A new internet-based “action kit” (called Nakba70action) filled with resources about the history of Israel/Palestine has been put on line by Robert Massoud, a Palestinian Canadian living in Toronto. He hopes it will be useful to groups or individuals who would like to find a way to mark the 70th anniversary of the “Nakba” (or disaster) that befell Palestinians in 1947/48. Read more…

In 1998, then PLO chairman Yasser Arafat designated May 15th, as “Nakba Day”, to commemorate the expulsion of 750,000 Palestinians from their homes and villages to make way for incoming European Jews who founded the State of Israel.

May 15th was chosen because that was the date of the founding of Israel, but in fact by then the “Nakba” was already well under way, beginning in December 1947, and ending with the armistice agreements signed in 1949. By “Nakba Day”, May 15th 1948, over 400,000 Palestinians had already been expelled and another 350,000 more would become refugees as the ethnic cleansing of Palestine continued. (Some argue that, the Nakba continues today as most of those refugees still live in desperate conditions mostly within 250 km of their original homes.)

This year, the 70th anniversary of Nakba Day is especially important because of recent events in Israel/Palestine, including the “Great March of Return” in Gaza which began on March 30th and will continue until May 15th – Nakba Day.

“The primary purpose of Nakba70Action.org is to make it quick and easy to organize and implement a Nakba 70th anniversary public commemoration,” says Massoud. “It is offered as a complete “action kit” providing the many elements needed to organize and hold a successful event”.

The kit includes videos, photos, and links to other resources. It can be found at Nakba70action.org.

Canada Talks Israel Palestine (CTIP) aims to promote a serious discussion in Canada about the complicated and emotional Israel/Palestine issue. We invite brief comments (under 100 words) from readers. No links to other websites/articles/YouTube, please. Both Zionist and non-Zionist opinion is welcome as long as it is expressed in a respectful way. Comments that include personal attacks on other commentators, foul language or are racist/antisemitic/Islamophobic will be deleted.