Foreign policy will be on the agenda at the Federal NDP Convention in Ottawa on February 15-16.  Leading up to the convention, Palestinian human rights activists have had many criticisms aimed at the party’s Foreign Affairs Critic Hélène Laverdière. She offers some answers. Read more….

Over the last several months, Canadian activists in support of human rights for Palestinians have been strongly critical of what they see as the NDP’s weak stance on the issue. The NDP “Socialist caucus” (not an official NDP caucus but an informal grouping of members) even called for the resignation last August of Hélène Laverdière its foreign policy spokesperson.

Another critic was Montreal human rights activist Yves Engler. Writing  on his blog Engler asked “Why would Laverdière legitimize Israeli racism?” Among other things, he pointed to her participation in the annual conference of The American Israel Public Affairs Committee (AIPAC) as an invited guest.  AIPAC boasts that the conference is “the largest gathering of pro-Israel Americans”.

Engler linked her role in the AIPAC conference to other apparent indications of her support for Zionism, including her participation in a tree-planting ceremony organized by the Jewish National Fund in Israel during her recent trip there as part of a delegation accompanying Canada’s then Governor-General David Johnson.

Still others have asked why she did not join the newly reconstituted Canada Palestine Parliamentary Friendship Group.

Canada Talks Israel Palestine met with Ms. Laverdière before Christmas to discuss some of the criticisms of the NDP’s  position on the Israel-Palestine issue and her approach to it.

About the AIPAC event – was it wrong to attend?

I queried Ms. Laverdière on her participation at the annual AIPAC conference, which is the largest pro-Zionist political event in the USA. It regularly brings together upwards of 15,000 people, including many Canadians, and is a significant event on the US political calendar. Was she not concerned that her participation would be seen as lending support to the Zionist organization?

Mme. Laverdiere was heavily criticized for speaking at the 2017 AIPAC meeting.

Ms. Laverdière responded by saying that, as in previous years, the NDP was invited to participate in a Canadian panel discussion with representatives of other Canadian political parties (Liberal and Conservatives) to discuss their positions with respect to the Israel-Palestine issue.

During her presentation at AIPAC, she outlined the NDP position – support for a 2 state solution, opposition to settlement activities, recognition of the State of Palestine, etc. etc. She knew that her position would not be shared by most of the AIPAC audience, but felt that not participating (and allowing the Liberals and Conservatives to have the whole floor) would be an error.

“As a former diplomat,” she argued, “I know that the only way to achieve positive change is to engage in dialogue, including with those we may not always agree with.”

I also drew Ms. Laverdière’s attention to that UN security council resolution (2334) passed unanimously in December 2016 (only the USA abstained) which condemned as illegal all Israeli settlement construction in the West Bank and East Jerusalem. It called on ALL UN members to ‘differentiate’ between Israel and the Occupied Palestinian Territories.

Disgracefully, Canada has so far avoided the issue of whether it intends to comply with the resolution which is actually a BINDING resolution on all members. I asked her what the NDP has done about this issue.

“I am very frustrated about this.” she told me. “I have sent no less than 3 letters to the Minister, raised the issue during Question Period and in Committee of the Whole. On one occasion, I got to address the Minister directly and repeatedly in committee. She never answered my questions.” (Her assistant later provided me with the link to Hansard which shows Laverdiere’s repeated questions and Freelands repeated “non answers” in this link to Hansard.)

Chrystia Freeland University—Rosedale, ON – Madam Chair, I would like to thank my hon. colleague for the opportunity to continue to speak more about our policy in the Middle East. As I said, we are a steadfast ally of Israel, and we are a friend of the Palestinians. We are determined to support peace in the Middle East.

Chrystia Freeland University—Rosedale, ON – Madam Chair, I would like to thank the member for continuing that line of questioning, because I had not finished my answer. We are committed to a comprehensive, just, and lasting peace in the Middle East, including the creation of a Palestinian state, living side by side, in peace and security with Israel.

Hélène Laverdière Laurier—Sainte-Marie, QC – Madam Chair, clearly there is no answer as to whether the Government of Canada will or will not adequately respond to a resolution adopted by the United Nations Security Council. That is a new one. I will move on to another topic.

One step toward compliance, of course would be to properly label goods and other products imported to Canada from the West Bank. But so far the Government has also ignored written requests from Laverdière as early as July 2017, asking that Canada demand that wines produced in the West Bank be labelled as such.

I also asked her why she had decided not to join the newly re-established Canada Palestine Parliamentary Friendship group. The group, chaired by Liberal Marwan Tabbara, includes members from 4 Federal parties. I asked Laverdière what significance should supporters of human rights for Palestinians read into to her non-participation in the group.

Ms. Laverdière responded by reminding me that her responsibilities as foreign affairs critic spread her very thin. Her attention is demanded on issues ranging from the Rohinga crisis to the situation in Syria. Furthermore, there are over 50 Parliamentary friendship groups and committees – from USA to Azerbaijan.

As the NDP foreign affairs critic, she argued, she could not possibly participate in all of them, so would have to choose. “I am already vice-chair of the House of Commons Standing Committee on Foreign Affairs and International Development. Until recently I was vice-chair of the All-Party Group on Genocide Prevention, but didn’t have time to continue. So as a matter of principle and as a matter of time”, she said, ”I have not joined any of the Parliamentary friendship groups“.

However, Ms. Laverdiere claimed that she does attach special importance to the issue of human rights for Palestinians. “The NDP will be represented on the committee by my friend and colleague Alexandre Boulerice, who has taken on significant responsibilities as vice-chair of the group,” she said.

On free trips to Israel

Several NDP members (including its new leader Jagmeet Singh) have taken advantage of free educational trips organized and offered by CIJA, the largest Canadian pro-Israel lobby group . The trips are unabashedly aimed at showing the ‘Israeli point of view’ to influential Canadians. I asked why the NDP does not refuse these trips or at least demand that its members make an effort to visit Palestinians at the same time. 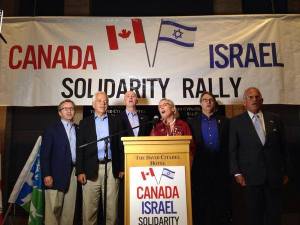 MP’s from all parties regularly take free trips to Israel paid for by the Centre for Israel and Jewish Affairs.

Ms. Laverdière noted that it is already official NDP policy to encourage MP’s to see various sides during sponsored trips, but the party has no way to enforce this on individual MP’s.

“MPs are permitted by House rules to do some sponsored travel, but with time constraints on MP’s schedules, adding days to organized trips can be a challenge. We have encouraged caucus members taking these trips to broaden their itineraries and visit Palestinian contacts and human rights groups. Until now there has not been a similar trip sponsored by the Palestinian side, but I hear there may be something in the works, and I am encouraged by that.”

It is no secret that the NDP caucus (and probably the party membership) is divided on the issue of Israel/Palestine. Some members are extremely concerned about Israeli violations both of human rights and of many UN resolutions. Other members are equally, or perhaps even more concerned about the issues of security for Israeli Jews. Several NDP caucus members participate in the Canada-Israel Interparliamentary Friendship group for example and NDP caucus members Randall Garrison and Murray Rankin are both on its executive committee.

However, it would appear that the strong showing of Niki Ashton during the leadership contest may have indicated to the NDP leadership as a whole that there is demand in the party for a firmer position in defense of human rights for Palestinians.  Perhaps the selection of Jagmet Singh as party leader might signal an opening for a slight rebalancing of Party policy away from former leader Tom Mulcair’s pro-Israel tilt towards stronger support for Palestinian human rights.

UPDATE: Since our meeting with Ms. Laverdiere, CTIP notes that the NDP (alone among Canadian federal parties) was quite clear in its criticism of Trump’s announcement on Jerusalem, and of Canada’s decision to abstain on the vote which condemned it.

Let’s see what happens at the NDP convention in February.

Canada Talks Israel Palestine (CTIP) aims to promote a serious discussion in Canada about the complicated and emotional Israel/Palestine issue. We invite comments from readers. Both Zionist and non-Zionist opinion is welcome as long as it is expressed in a respectful way. If you support our educational mission, why not join? Or make a donation? Or learn more about what we do?  Contact us at membership.ctip@gmail.com.