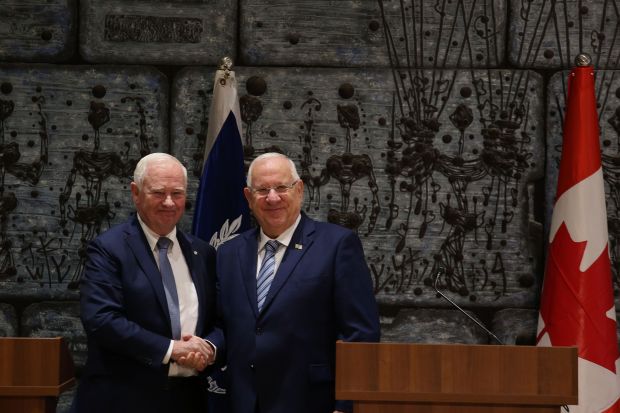 Governor General David Johnston met with Israeli President Reuven Rivlin during his recent trip to the Middle East. Canada’s policies toward Israel have not changed since the election which brought the Trudeau liberals to power, according to Globe and Mail columnist Gerald Caplan. Read more.

Gerald Caplan is an Africa scholar, a former NDP national director and a regular panelist on CBC’s Power & Politics. This abridged version of his December 13th column in the Globe and Mail appears with his permission.

The Prime Minister dispatched Governor-General David Johnston to the Middle East recently on a mission that largely wasted everybody’s time.

The G-G was instructed to articulate the government’s position favouring the creation of an independent Palestine living in peace next to Israel: “a two-state solution and a just, long-standing and comprehensive peace.”

The G-G’s tour, so the media were informed, is part of the Liberal government’s effort to “recalibrate” Canada’s policy in the Middle East. Justin Trudeau promises a more “balanced” position after a decade of Pavlovian Conservative support for Israel in any and all circumstances.

The new government’s policy towards Israel and Palestine, as articulated by the G-G, just happens to be identical to the old government’s policy. Canada may be back, but in the Middle East it’s Stephen Harper’s Canada that is back

Yet the new government’s policy towards Israel and Palestine, as articulated by the G-G, just happens to be identical to the old government’s policy. Canada may be back, but in the Middle East it’s Stephen Harper’s Canada that is back. And both governments’ stands are curious given that Israeli Prime Minister Benjamin Netanyahu has flatly said he will never accept an independent Palestinian state. Everyone but Canadian governments seems well aware of this.

By coincidence, at about the same time, Roger Cohen, the New York Times columnist, wrote on the same subject. Cohen is a tough-minded Jewish liberal who knows the Middle East intimately. Once a strong advocate of a two-state outcome, today Cohen believes promoting that outcome is “beating a dead horse.” “A two-state resolution of the Israel-Palestinian conflict is more distant than ever,” he writes.

Nor is there any serious “peace process.” On the contrary. The unjust status quo continues to be steadily reinforced. Constantly increasing numbers of Israeli settlers have moved into Palestinian lands that Israel has been occupying for fully half a century. In the past decade or so, their number has increased from 249,000 to 370,000. These “facts on the ground” give settlers ever-greater influence in the centres of Israeli power and leave the Palestinian West Bank, says Cohen, a collection of “countless little self-administering enclaves … broken up by Israeli settlers.” There are in actuality 165 of these separate little Palestinian islands.

Netanyahu has vowed he will never agree to force those settlers off Palestinian lands, nor can President Mahmoud Abbas of the Palestinian Authority in the West Bank, effectively an Israeli collaborator, accept a Palestine that is not viable.

The reality is that it is madness to imply any kind of equivalence between the two entities. Israel is a normal, thriving independent western nation, except that it receives many billions in “aid” from foreign governments, especially the United States, and its neighbours cause it occasional anxiety.

This record of the brutality of both Israeli settlers and Israeli soldiers against mostly defenceless Palestinians shames Israel and shames Israel’s diaspora backers.

But it is the reality. It is how many Israelis regularly treat Palestinian men, women and children, old and young. Ben Ehrenreich, an American novelist and journalist, spent three years mostly embedded in a few small West Bank villages as their inhabitants struggled against encroaching Israeli settlements. “The two-state solution,” he too learned, “has been a cadaver for years.”

It’s David versus Goliath, but, this time, the giant Goliath is an Israeli, and the victor. As Ehrenreich watches, his Palestinian friends, together with their possessions, are humiliated, terrorized, abused, insulted, evicted, demolished, confiscated, dispossessed, expropriated, beaten, wounded or killed by Goliath, and imprisoned, often in solitary confinement (which means torture) for long stretches.

A few words from the Canadian government about Israeli brutality and Palestinian suffering would at least offer Palestinians what they so desperately crave and so rarely get – hope, respect, dignity and understanding.

No one expects Mr. Trudeau to come up with a practical solution to this intractable situation, and in fact he deserves plaudits for renewing Canadian funding to the UN Relief and Works Agency for Palestine, which the Harper government had cruelly terminated.

But a few words from the Canadian government about Israeli brutality and Palestinian suffering would at least offer Palestinians what they so desperately crave and so rarely get – hope, respect, dignity and understanding.

Canada Talks Israel Palestine (CTIP) aims to promote a serious discussion in Canada about the complicated and emotional Israel/Palestine issue. We invite original submissions that promote a serious conversation on this serious topic. To submit an article, make a donation or learn more about what we do, contact us at: membership.ctip@gmail.com.