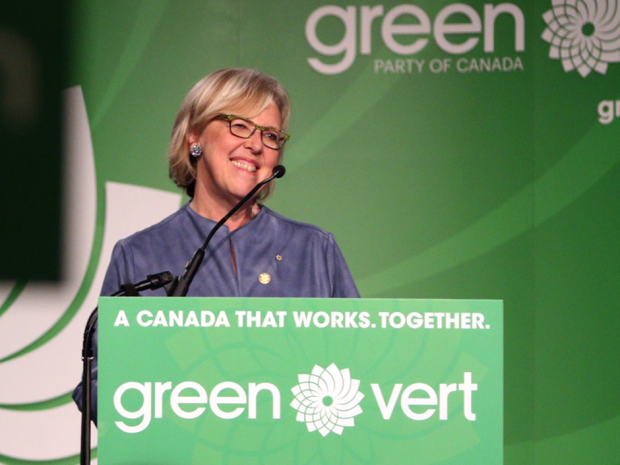 About 300 members of the Green Party of Canada (GPC) met in Calgary on Dec. 3/4 at a special general convention. The main objective was to review a controversial motion adopted last August to support BDS, the movement to boycott Israel. But now there are contradictory reports about what was decided in Calgary. Was it a step forward, or a step back? What really happened? Read more.

Media reporting on the outcome of the GPC special convention in Calgary could hardly have been more confusing… or more contradictory.

Some journalists claimed that the GPC had specifically turned its back on supporting the movement to boycott Israel known as BDS.

However, other reports claimed the opposite:

So what really happened? Why can’t the media get its story right? Did the GPC reinforce its opposition to Israel’s policies or did it water down its position?

The confusion seems to stem from the interpretation of a “compromise resolution”  awkwardly entitled “Measures to pressure the government of Israel to preserve the two-state solution: addendum to current Middle East Policy.”

That compromise resolution had been carefully worked out by proponents of the earlier BDS motion, led by former GPC Shadow Cabinet member Dimitri Lascaris, and representatives of Party leader Elizabeth May who was strongly opposed to it. The new resolution left out mention of BDS, but did criticize Israel and called for increasing pressure on Israel through sanctions and economic boycott.

When the “compromise resolution” was finally put to a vote after several hours of discussion, a sea of green cards indicated overwhelming approval.

Debate on the motion at the convention took up most of Saturday. More than 20 different people intervened, mostly in favour of the motion, but there were also a number of strong critics. In the end, after several attempts to attain “consensus”,  in a recorded vote over 84% of the delegates approved the compromise resolution.

However, almost as soon as the ink was dry, there were different interpretations.

While some thought the GPC decision was an “historic step forward”, Green Party leadership seemed to downplay both the debate and the motion despite the fact that this was the prime reason for the special general meeting. The official GPC press release issued immediately after the convention barely mentioned the controversial Israel/Palestine debate, focussing instead on electoral reform and the Trudeau governments Kinder Morgan pipeline decisions.

Green Party Leader Elizabeth May went further in an interview with Canadian Jewish News saying that she supported the compromise resolution “because it rejects the boycott, divestment and sanctions (BDS) movement against Israel.”

It appears that May feels the need to politically distance herself, and the Party, from the BDS movement. “It needs to be said very clearly that the BDS movement does not understand the issue properly and is in fact undermining the peace process itself,” May told The CJN, the day after the addendum passed.

May’s statement appeared to come as a surprise to many GPC members. “Although the consensus resolution does not endorse the BDS movement, I am aware of no GPC policy which “explicitly rejects” the notion of boycotting Israel”, commented Lascaris.

It is not clear if May does not understand, or just wants to downplay, the fact that the new GPC resolution, while making no reference to the BDS movement, adopts all its main demands, and endorses its non-violent tactics.

A step forward or a step back?

Whether consciously or not, in adopting the new “compromise resolution”, the GPC has made a tactical decision. It agreed to drop its open endorsement of the BDS movement, but adopted the main democratic demands of the 3 main groups of Palestinians: the refugees, those under occupation, and the Palestinian citizens of Israel. The GPC now is the only Canadian political party to express concern and support for all 3 major groups.

“BE IT RESOLVED the GPC calls on the Government of Israel to: respect the intent of UN Resolution 194, (on the right of Palestinians to return – ed), the implementation of which is to be negotiated in good faith with the legitimate representatives of the Palestinians, accord to the Arab-Palestinian population of Israel equal political and civil rights, and end Israel’s illegal occupation of the Occupied Palestinian Territories (OPT) and the Golan Heights, and Israel’s siege of Gaza.”

The compromise resolution must still pass an on-line ratification vote by the GPC general membership. Voting is now open and closes February 6, 2017. Although the motion was overwhelmingly passed by the 300 members present in Calgary, it is not known how well it will fare when put to the GPC’s 20,000 members.