Among the millions of new refugees displaced by the war in Syria are hundreds of thousands of existing refugees – Palestinians who have been stuck in camps in Syria and Lebanon since 1948. They depend on UNRWA, a UN organization, for the basics of survival. But in a recent letter, Liberal minister Marie Claude Bibeau seems to say that the Liberals are not in any hurry to reverse the Harper government’s decision to cut off UNRWA funding. Read more.

In what many saw as a reflection of its very public pro-Israel stance, in 2012 the Harper government cut off Canada’s contribution to UNRWA, the main UN agency for Palestinian refugees. That money goes to provide humanitarian assistance, medical services and education to over 5 million Palestinian refugees.

With the election of the Trudeau government, however, many expected this to be reversed. A number of NGO and church groups have written Stephane Dion asking that critical funding be resumed. Perhaps they were hoping that the Trudeau team’s stated sympathy for refugees would lead it to take a more humanitarian stance toward those made homeless with the creation of the State of Israel in 1948. 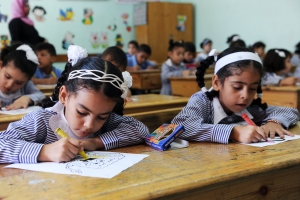 First Day at School in Gaza . Thousands of refugees’ children have access to education, health services and even basic food thanks to an increasingly overstretched UNRWA.

The urgency of the issue has been raised by both the Green Party and the NDP. On June 14th, NDP Foreign Affairs Critic Hélène Laverdière called on the Liberals to immediately renew its contributions to the agency.

“In February, the Liberals seemed ready to resume contributing to UNRWA, and start reversing this damaging Conservative policy that began in 2009 and led to a complete cut off of aid in 2013,” said Laverdière. “But in the months since, there has been no news from the Liberal government – while the crisis in the broader region has only increased the humanitarian need among Palestinian refugees.”

There has also been some grassroots pressure.  A petition to Global Affairs Minister Stephane Dion, launched by Canadians for Justice and Peace in the Middle East (CJPME) gathered several hundred signatures.

But the Liberals are also being lobbied hard on the other side by Israel’s supporters.Simon Fogel, President of the Centre for Israel and Jewish Affairs stated a strong opposition to funding in a Globe and Mail article.

Dr. Charles McVety, national chair of an organization which calls itself Christians United for Israel (CUFI) Canada, and calls itself “the largest pro Israel advocacy organization in the country”, has strongly denounced the idea of giving $15 million to an agency “known for its support of terrorists and anti-Semitism”. (This is an accusation which UNRWA officials strongly deny.)

The Liberal answer has been slow in coming

Faced with these competing pressures, the Liberals continue to dither. Those who signed the CJPME petition are just now (2 months later) getting a non-committal (some might say evasive) response from Mme. Marie Claude Bibeau, Minister of International Development. Here is an excerpt from the letter she sent to me:

Thank you for your email of May 5, 2016, regarding the United Nations Relief and Works Agency for Palestine Refugees in the Near East (UNRWA). I regret the delay in replying to you.

Canada is committed to the goal of a comprehensive, just and lasting peace in the Middle East, including the creation of a Palestinian state living side by side in peace and security with Israel, resulting from direct negotiations. (…) .

We are assessing how best to provide our response to vulnerable Palestinians, based on needs, ability to deliver assistance effectively and accountably, and available resources. The government has not yet made a decision regarding funding to UNRWA for this year. (Ed note: emphasis mine). However, please be assured that all options for providing assistance will be assessed in the decision-making process.

Thank you for your interest in this matter.

Mme Bibeau’s answer seems to diminish hopes that Mr. Trudeau’s “sunny ways” will lead to a change in policy on this file any time soon.

“I am disappointed that Minister Bibeau and the Trudeau government have dithered on the question of UNRWA funding for so many months.”  notes Thomas Woodley of CJPME, whose organisation initiated the petition. “For all intents and purposes, Canada has missed a chance to contribute for 2015 – which was perhaps their strategy for dithering from the beginning.”

Mr. Woodley may be right that the Liberals are just ragging the puck. But since Mme. Bibeau says that “no decision has yet been made”, it is probably not too late to write her (Marie-Claude.Bibeau@parl.gc.ca) and to your own MP to tell them if you think this is one Harper decision that the Trudeau government should reverse.

Comment? Do you think that the Liberals are really opposed to UNRWA funding, or are they just dragging their feet because there hasn’t been enough lobbying in favour of restoring UNRWA funding?