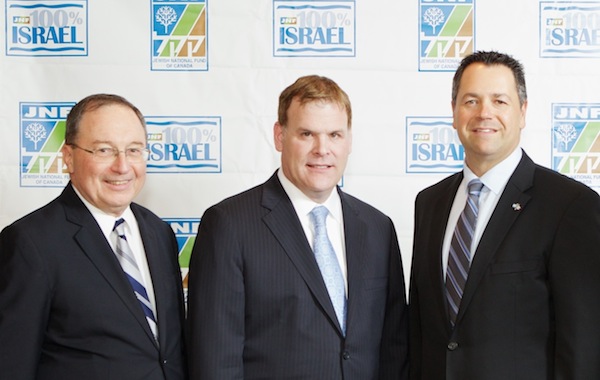 In honour of his years of devoted service, former Conservative foreign minister John Baird will have a park named after him – in Israel. Meanwhile, the Green party will debate a policy resolution to revoke the charitable status of the park’s funding organization

Former Conservative foreign minister John Baird will have a park named after him – not in his hometown of Nepean, Ontario or in his former Ottawa West riding – but in Israel. The Jewish National Fund of Canada (JNF-Canada) is sponsoring the development of “John Baird Park” in Sderot, Israel.

At a gala fundraising ceremony in Vancouver in June 2015, JNF executive director Ilan Pilo lauded Baird as “a man of integrity and a true friend to Israel” and honoured him “for years of devoted service to the citizens of Canada, his dedication to the Jews of Canada, and to the State of Israel.”

Baird’s dedication to the State of Israel appears undiminished. In September 2015, Baird was appointed to the Board of the Friends of Israel Initiative, joining former Spanish prime minister José María Aznar, former Northern Ireland prime minister David Trimble, former US ambassador to the UN John Bolton and other notable Israel advocates, in an organization whose mission is to provide high-level cover for Israel. Trimble served as an “international observer” on Israel’s Turkel Commission, which investigated – and not surprisingly, exonerated – the Israeli Defence Forces for their 2010 raid on the Mavi Marmara, killing 10 civilians.

In May 2016, Baird addressed a day-long training session of the World Jewish Congress (WJC) “Jewish Diplomatic Corps” and the Centre for Israel and Jewish Affairs “Young Leaders” on his views of Israel, Iran and the international Boycott, Divestment and Sanctions (BDS) movement. The WJC co-hosted the recent, deliberately misnamed, “Ambassadors against BDS” conference at the UN (There were no ambassadors present, other than Israel’s).

The park as parable

Notwithstanding its benefits to community life, the main purpose of John Baird Park, like Sderot itself, is to provide a more-or-less permanent talking point and parable of Palestinian terrorism and Israeli resilience.

Sderot was founded in 1951 on lands belonging to the destroyed Palestinian village of Najd, whose citizens had been expelled to Gaza by Jewish militias in May 1948. The Israeli government insisted that Sderot and the nearby Nahal Oz kibbutz be established within 1 mile of the Gaza border – that is, within 1 mile of the people they had expelled and then prevented from returning.

When the inevitable happened – an Israeli killed by a Palestinian – General Moshe Dayan seized the opportunity to deliver a stirring eulogy which has since entered the national mythology: “A generation of settlement are we, and without the steel helmet and the maw of the cannon we shall not plant a tree, nor build a house.” Rhetoric echoed in the promotional material for John Baird Park, “built in memory of the 66 brave IDF soldiers who lost their lives during Operation Protective Edge” and featuring a soccer field, volleyball court and “a plaza with a fountain/splash pad, seating areas, pergolas…and life-saving bomb shelters.”

JNF and the arc of history

Since its creation in 1901, the purpose of the Jewish National Fund (JNF) has been to acquire land in historic Palestine for “the purpose of settling Jews on such lands and properties.” Today, the JNF enjoys charitable status in over 50 countries worldwide, including Canada. JNF-Canada provides tax receipts for donations, meaning that a significant proportion of its budget effectively comes from the taxes of ordinary Canadians.

Billing itself as an environmental organization, many of JNF’s forestation projects were actually designed to cover over and erase Palestinian villages destroyed by Israeli forces. A particularly egregious example is “Canada Park,” a JNF-Canada-funded project built over the ruins of three West Bank Palestinian villages, whose residents were expelled and homes demolished by Israeli forces in 1967.

Human rights organizations, including Independent Jewish Voices Canada have launched a worldwide “Stop the JNF” campaign. All of which has led several Green Party members, including party leader Elizabeth May, to sponsor a policy resolution which “calls on the Canada Revenue Agency to revoke the charitable status of the Jewish National Fund for contravening public policy against discrimination and for its failure to comply with international human rights law.”

The resolution may not pass, and the Green Party currently has only one member in Parliament, but taboos are being broken and the arc of history is bending. Which side is John Baird on?

Grafton Ross is a geographer and research analyst who has spent years studying the issues and events in Israel/Palestine.  Ross currently serves as vice-chair of Canada Talks Israel-Palestine (CTIP).  The views expressed are the author’s own, and do not necessarily represent those of CTIP.