Omar Barghouti, one of the founders of the international movement to boycott Israel spoke at Carleton University in 2009. He regularly travels to Europe and the USA. But Israeli authorities have just imposed restrictions on Barghouti, barring him from travelling outside Israel.

Israel has refused to issue a travel permit to Omar Barghouti, one of the founders of the Boycott, Divestment and Sanctions Movement against Israel, saying that his residency rights in Israel are currently being reconsidered.

As the child of Palestinian refugees, Barghouti was born in Qatar. He married a Palestinian citizen of Israel and moved back to Israel in 1994.

He has “Israeli residency” but Israel has not made him a citizen, and when he travels abroad, he must get special permission from the Israeli government. 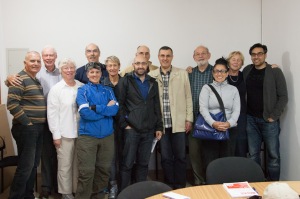 Barghouti regularly meets with visiting delegations. Here with a Canadian group in Ramallah in 2015

He was invited to give a presentation at Stanford University in the USA in April but Israel would not issue the necessary papers.  Instead he was forced to speak to the conference through a video presentation using Skype which has now been viewed by hundreds across North America.

A number of international human rights organizations have raised their voices in protest. Sarah Leah Whitson of Human Rights Watch told The Electronic Intifada that “Israel’s refusal to renew Barghouti’s travel document appears to be an effort to punish him for exercising his right to engage in peaceful, political activism, using its arsenal of bureaucratic control over Palestinian lives.”

Israel has become increasingly rattled by the growing strength of the BDS movement and Barghouti has been one of its most effective spokespersons. The move comes only a few weeks after an Israeli cabinet minister darkly hinted in a public meeting that Barghouti should be treated like a terrorist. The implication in trigger happy Israel was all too clear.

Comments?  Why is Israel restricting Barghouti’s travel permissions? Is this as ominous as some believe? Should the Canadian government do something about this?   Or are the concerns exaggerated? All opinions, respectfully voiced, are welcome.