Thousands of University of Waterloo students participated last week in the first-ever referendum on UW’s links to Israeli universities. The “sever ties” referendum campaign failed to gain a majority, but it provoked a lot of discussion including among students who had never heard about the Israeli/Palestinian conflict. Learn more…

The petition called for Waterloo to cut its links to 5 specific Israeli universities including Technion University, in Haifa. Technion is Israel’s most prestigious technical and engineering university.

The organizing committee alleged that Technion (which plays a role in Israel somewhat similar to Waterloo’s leading role in Canada in high tech and engineering) is actively involved in designing equipment for the Israeli military.

The petition did not call to cut off links or to boycott individual students or professors from Israel – but it called on UW to break off official links to those universities involved in Israel’s occupation. It was spurred by UW signing a research agreement with Technion in 2014.

Approximately 20% of the undergraduate body participated in the voting. In the end, 1803 students voted to sever ties, while 2,329 voted against. 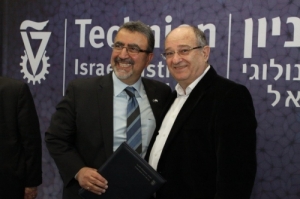 While the referendum failed to gain a majority, that was not the only objective according to Zainab Ramahi, one of the organizers. “We see this as the first step in a long term education project. We handed out thousands of pamphlets and had hundreds of discussions with students on campus, many of whom had never heard of the Israel/Palestine issue before. Now thousands of new people have had an introduction to the subject.”

The referendum was proposed by the Palestine Solidarity Action group formed on campus in 2014.  Under the rules established by the student union, a supervised referendum will be called if more than 10% of undergraduates sign a petition asking for it.

Student Union referendum rules call for the creation of “Yes” and “No” committees, each of which has a Facebook account.  A quick reading of both YES Facebook page sums up the mood of those want to promote a serious discussion of the Israel/Palestine issue.

“You guys raised an incredible amount of awareness on such an important issue that many people knew little about and that is what matters,” read one post on the YES FB page. “This wasn’t a loss because a powerful movement like this will motivate people to want to take matters into their own hands and try to make a positive change. (…) I could not feel more proud to be a part of a student body that cares, and that wants to work towards ending the suffering of people who have no voice. Thank you for bringing this conversation to Waterloo. You guys are amazing.”

The conversation, it seems, is just beginning.