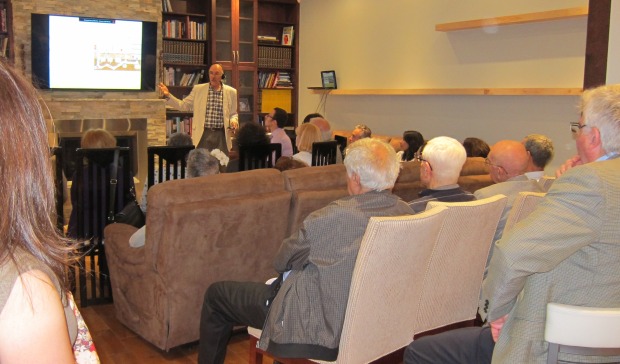 Peter Larson was one of three speakers at “Gaza: the living museum of the Palestinian Nakba”, a meeting organized in Montreal on June 4th.

About 40 people gathered in a Montreal house to discuss the current situation in Gaza at a meeting organized jointly by the National Council on Canada Arab Relations and Canadian Friends of Sabeel.

Robert Assaly, Chair of Canadian Friends of Sabeel, spoke about his recent trip to Gaza and the devastation he witnessed first hand in the wake of Israel’s “Operation Protective Edge”. Father Assaly, who was several years ago the Anglican Vicar to Gaza, showed the audience slides of the places he had visited first hand.

Peter Larson, Chair of the National Education Committee on Israel/Palestine, then followed, tackling the bigger political question asking “why Israel sees Gaza as an existential threat”. He explained that the concentration of over 1 million Palestinian refugees in Gaza, all of whose families were expelled from Israel in 1948 make Gaza a very difficult challenge for Israel. Israel has few options, he said, and all of them are bad. The best option for Israel is to recognize that the root of the problem lies in the expulsion of Palestininans in 1947/48 (the Nakba) and begin a process of addressing the rights of the refugees.

Dr. Tarek Loubani (l.) is a Canadian emergency room doctor of Palestinian origin. He is currently “crowdfunding’ a project to bring solar energy to Gazan hospitals whose powersupply is controlled by Israel.

Dr. Loubani is currently seeking funds for a project to bring solar power to Gaza hospitals. He started the presentation by recounting a dramatic episode he had lived himself when power was cut in a Gaza hospital while he was dealing with a desperately ill patient.

More information is available about the Gazapower project on its Facebook site. It also includes a short video in which he describes the project. His objective is to raise $200,000 by the first of July.

All three presentations were followed by intense questions and even more intense discussion. The situation in Gaza is extremely difficult for those on the ground, but reports from the ground indicate that the spirit of resistance is very strong and shows no sign of subsiding.