CBC did not do any coverage of Jeff Halper’s tour. Nor were they interested in interviewing him. The same goes for CTV, TVO or any of the major media outlets. Why?

About 3 days after Jeff Halper spoke to a capacity crowd at the First Unitarian Congregation in Ottawa, I received two different emails from people who had attended his lecture:

“Thanks, Peter, for inviting me to the Halper lecture…. I have not seen any coverage so far of his talks. Are the media boycotting him?”

“Hey Peter, Jeff was terrific. Why don’t you try to get him on CBC television? More people need to hear him.”

Naturally, I was pleased that both writers felt Jeff’s message deserved a wider audience. In Ottawa, Halper had spoken to nearly 500 people at 9 different events across the city. And he was on a 12 city speaking tour across the country. The total number of people who would hear his message would almost certainly number in the thousands. Surely that would interest the media?

Alas, it does not appear so.

We had in fact tried very hard to get media coverage in Ottawa for Halper. We had written to over 50 journalists – both national and local – informing them of the event and even inviting them to meet Halper personally. To no avail. Not one showed up. As far as I know, only one even answered us – a young francophone journalist from Radio Canada. But it appears that his initial enthusiasm was dampened after he had spoken to his editors, and in the end he gave us no coverage.

I also know that the National Tour organizers had gone to great lengths to try to get Halper some national media coverage, including at CBC flagship program like “The Current” and “Power in Politics”. No sale. 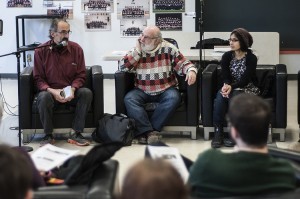 Halper speaks on a panel at Concordia University. Photo credit: The Link

They had also tried to get an op ed piece by Jeff placed in the Globe and Mail or The Toronto Star. Same answer. (Or rather, no answer at all).

However, the shutout was not total. There were articles in the “alternative media” like Rabble.ca, or the student press like Concordia University’s “The Link”. A quick Google search reveals that in the “mainstream” media, articles appeared only in a few of the smaller local papers, including the Waterloo Record, The Hamilton Spectator, the St. John’s Telegram and the St. Albert Gazette. I was also told that in Montreal, the Gazette did not cover Halper, but there was an article in the “Metro” (the mass distribution free publication).

Is it a conscious “boycott”?

The largest national mass media outlets (public and private) find the Israel/Palestine issue problematic. Stories about Israel/Palestine, especially ones critical of Israel, are going to get them into a lot of trouble – with readers, with interest groups and with advertisers. (Or in the case of the CBC, with the government itself). Trouble they don’t particularly want. So it doesn’t take a “boycott” in any organized sense. Each paper makes the same decision based on its own internal priorities.

However, we can also see that a number of avenues for information dissemination are open to us – notably the “alternative” media, student newspapers, and local publications in the smaller centres which appear to have more liberty to do stories on “local” events.

If the mainstream media is reluctant to publish views critical of Israel, perhaps it makes sense to focus our attention on those media that are open to hearing alternative views on this important topic.

Your comments – especially contrary views – would be most welcome.