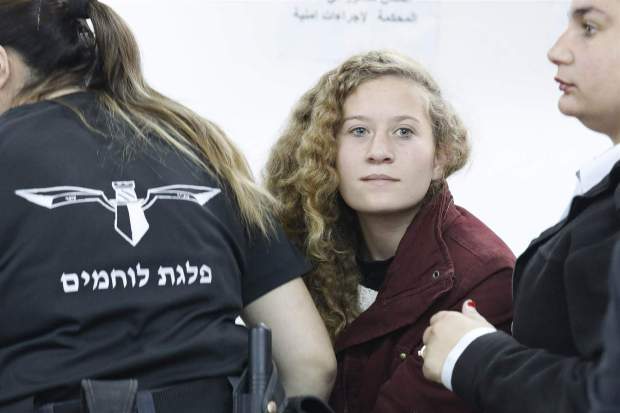 Sixteen year old Ahed Tamimi became a poster girl for the new Palestinian resistance after she was videoed defending her brother and family by defiantly slapping an Israeli soldier on her family property in the West Bank in December.  Senior Israeli politicians argued to CBC that she is too “western looking” to really be Palestinian.  Read more.

A Palestinian teenager, Ahed Tamimi, will face an Israeli military court today (Feb. 13) charged with slapping an Israeli soldier minutes after another soldier had shot her cousin. She turned 17 while in prison, and has now been held in detention for almost two months. A report by Israeli daily Haaretz says that reporters will be barred from the trial. Conviction rates for Palestinians in Israeli military courts exceed 99%.

“Meet 17 year old Ahed Tamimi the new face of Palestinian resistance”, wrote Derek Stoffel, CBC’s Jerusalem correspondent, about the arrest and detention of the latest Palestinian child to be taken into custody by Israel.

Tamimi’s blonde hair and blue eyes make her instantly appealing to western audiences, to the discomfort of senior members of  the Israeli government

“The blond-haired, blue-eyed Palestinian girl spent her 17th birthday inside an Israeli military prison last week, where she, along with her mother, awaits trial on Feb. 13“, wrote Stoffel.

“In this age of social media and viral videos, Ahed’s defiance has made her into something of a star in the Arab world and beyond.”

Stoffel’s video report for CBC Television is available on YouTube (the segment begins at the 25 minute mark).

Tamimi has become an international star. Her picture is popping up everywhere, and a cute cartoon series briefly describes her struggle, along with that of her family, for their rights under Israeli occupation.

Israeli authorities are clearly concerned about the growing international media coverage of the Tamimi case, of which CBC is only a small part. Stoffel’s CBC piece was fiercely attacked by Honest Reporting Canada, a part of the Israel lobby in Canada. It sent a letter to the CBC umbudsman, taking great exception  to the fact that Stoffel actually used the words “occupation” and “resistance in his piece.

Back in Israel, authorities have begun a counter attack aimed at undermining the credibility and authenticity of young Tamimi and other children who were resisting occupation troops. They portray it as all just Palestinian theatre aimed at gaining support from a western audience.

Some Israelis openly questioned whether young Ahed was really Palestinian at all. An article in the Times of Israel wondered if she was “an actor, or a former Jew”.

Stoffel reported that a secret Israeli parliamentary committee had launched an investigation into the Tamimis in 2015 to determine whether the demonstrations were genuine or the family was being paid.

Michael Oren, the Israeli deputy minister (and former Ambassador to the USA) who led the probe, claimed to CBC that the children “were being chosen because of the way they looked … they dressed Westerner (sic). They didn’t dress like West Bank Palestinian children.”

What about identity cards and registration numbers?

Ambassador Oren and his secret parliamentary committee apparently chose to ignore the fact that EVERY Palestinian child born in the Occupied Palestinian territories must be registered with the Palestinian Authority which must share the information with Israeli authorities.

Palestinians say that a Palestinian in the West Bank could not last a week without this document. Without this registration (and a registration number) it is impossible to go through any of the dozens of Israeli checkpoints inside the West Bank in order to go to school, work or even to the hospital.  The card also includes the names of parents and grandparents, as well as place of birth.

Seventeen year old Ahed Tamimi has been registered with Israeli authorities for all of her seventeen years.

What about her blonde hair and blue eyes?

It’s true that most Palestinians have dark hair and an olive complexion. But the Palestinian population also reflects the genetic fingerprints of centuries of invasions by Turks, Persians, Greeks, Romans, Mongols and Crusaders, among others. I assume soldiers from the British Army may have also left some genetic traces during their 31 year occupation of Mandate Palestine from 1917 to 1948. The overall result is that it is not uncommon to find Palestinians today with fair skin, flaming red hair or dramatic blue eyes.

These young Palestinians are among many I met whose face and eyes reflect Palestine’s storied past as the gateway between the East and the West.

OK – What about that western clothing?? 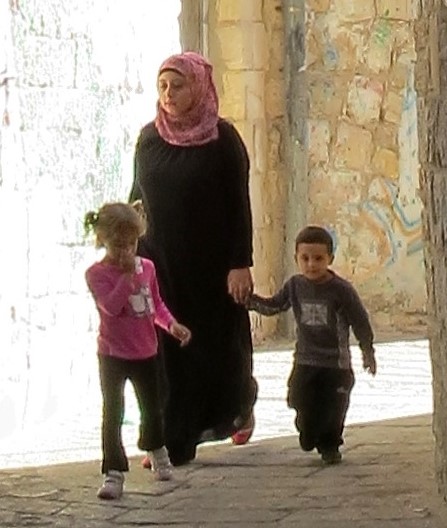 Could this young girl’s suspiciously light hair and “gasp” western style shirt and running shoes be a sign that she is not really Palestinian? Perhaps someone should ask her mother!!

Ambassador Michael Oren is apparently concerned about the fact that Ahed Tamimi dresses “western”. Wouldn’t that show that she might not be Palestinian at all, but some kind of foreign “plant”?

However, Palestinians scoff at this. If that really is his concern, they say, he might want to check out the stores in Ramallah, Jenin, Bethlehem and even Hebron, where western style clothing from shirts to shoes (much of it made in China) has flooded the  market.

Its hard to escape the conclusion that Deputy Minister (and former Israeli Ambassador to the USA) Michael Oren knows exactly who Ahed Tamimi is – a Palestinian child who has grown up under occupation. Many, including CBC’s Stoffel, say she represents a new face of the Palestinian resistance – unarmed, but unafraid. As a former Ambassador to the USA, Oren  understands how dangerous it would be for Israel if American audiences began to pay attention to Tamimi … or to the hundreds of other Palestinian children in Israeli jails for resisting its brutal occupation.

Canada Talks Israel Palestine (CTIP) aims to promote a serious discussion in Canada about the complicated and emotional Israel/Palestine issue. We invite brief comments (under 100 words) from readers. No links to other websites/articles/YouTube, please. Both Zionist and non-Zionist opinion is welcome as long as it is expressed in a respectful way. Comments that include personal attacks on other commentators, foul language or are racist/antisemitic/Islamophobic will be deleted without warning.