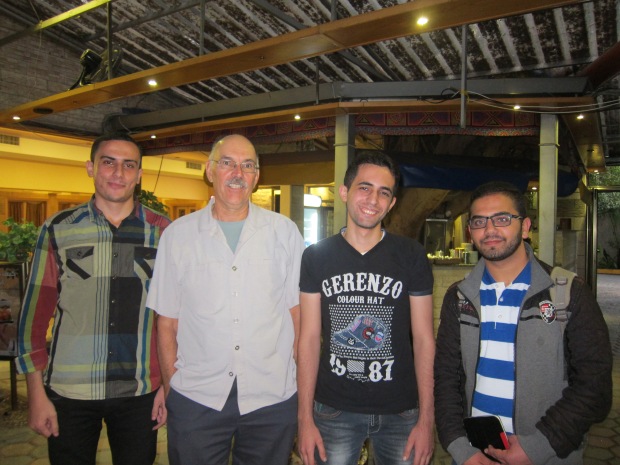 I met with Ahmed Alnaouq (l) and some other Palestinian students in 2015 in Gaza City. They would like to meet Canadians. Since Israel won’t let them leave, they invite you to visit them in Gaza. Read more…

Two years ago, I spent several days in Gaza meeting and talking to young university students. They all had stories to tell about their frustration over not being allowed to leave the tiny Gaza strip, which at 365 km2, is barely half the area of the city of Toronto. They want to meet other people, hear other ideas, expand their horizons. It makes them frustrated, sad and… even a little angry that Israel has blockaded Gaza for over 10 years and won’t let them out. Israel says it does this to prevent terrorism.

But they aren’t sitting back. They are trying to overcome their isolation by reaching out on the internet. One of the impressive young men I met was Ahmed Alnaouq, the Gaza coordinator of a nonprofit program called “We are Not Numbers”, which links up young Palestinian writers and artists from Gaza and Lebanon with English speaking mentors from around the world to tell the human stories behind the numbers in the news. (Check it out, you will find dozens of interesting stories there by young people living in Gaza or in refugee camps in Lebanon.)

Knowing someone through the internet is one thing – meeting them in person is something else. Ahmed would like to invite Canadian students to come to visit him and his friends in Gaza. They would be happy to show you around, help you find accommodation. You will find that Palestinian students in Gaza, like students around the world, are curious, lively, friendly and exciting.

Here is his letter of invitation:

My name is Ahmed Alnaouq. I became 23 years old last month. When my friends asked me to tell them my wish for the new year, my answer was to travel even for a single day to anywhere outside Gaza. I have lived 23 years in an open prison surrounded by high walls and topped with barbed wire.

But since Israel won’t let me travel outside Gaza, I invite you to come to visit us in Gaza and watch our life closely. I invite you to behold hundreds of Palestinians gathering around the Seaport as one of the only places of entertainment in Gaza. At the seaport, you would meet all kinds of people: fishermen laboring day and night to catch some fishes, young students skipping school to meet with their friends, kids playing with their families and crying for some candies, young guys and their girlfriends walking by the sea.

Each and every one of us has a story to tell, a story of a student who lost his scholarship in a foreign country because Israel won’t give him an exit permit, a wife who has been separated from her husband who did get out and found work but who cannot return, a fiancée who couldn’t unite with her husband-to-be because he is in the West Bank, a sick person who waited and waited for days to get Israeli permission to leave Gaza to get surgery, not to mention lots of other stories of other people died waiting to be rushed to a hospital outside.

I invite you to meet with the families of the 14 kids who passed away last month waiting to get permits to receive medication.

I invite you to meet with some of the thousands of Palestinians who are still dwelling in temporary caravans more than 2 years after Israel demolished their homes on their heads in 2015.

I invite you to visit Gaza and see the blueness of the sky united in tranquility with the blueness of the sea and at the far end of the horizon, an orange sun spreading beams of hope all over the city, a hope that one day, in spite of all the toughness we endure, we will be free.

I invite you to see the world’s most densely populated place— a refugee camp called Alshajaia. From there, a few hundred meters away, you would see past the wall that fences us in, to see lands that were once home to thousands of Palestinians, but now are guarded by the Israeli military who will unhesitatingly kill any farmer who would get near the borders to see his lands.

At the first glance, you may think Alshajaia is a new residential area, but the fact is that it is a thousand years older than the US and Canada. It looks new because the people rebuilt it after it was turned into ashes by Israel’s jet planes and tanks in the last war.

I invite you to meet the kids there, and everyone would tell you a story and describe a scene that is printed in his mind, a scene of body parts they saw while fleeing the area in the war. I invite you to come and meet the people, and hear their stories of love, life, and hope. I invite you to see their wide smiles and deep pain and the scars on every face.

I invite you to visit BOTH Israel and Gaza and see the contrast between brightly lit Israel, and how gloomily Gaza sinks in darkness as we are starved of electricity. I invite you to see how one of the oldest cities in history—Gaza—is suffering the consequences of war and siege, and how it was brought to centuries backwards. I invite you to see Palestinian families cooking with firewood instead of gas because Israel has limited the fuel getting in, and taxi drivers running their vehicles on vegetable oil instead of oil as well.

And, until you come, as the project manager of We Are Not Numbers, I invite you to follow us on Facebook, (we already have over 21,000 followers), hear our stories and listen to our dreams as people. I invite you to witness that Gazans aren’t terrorists or backwards, but loving people and talented, doing our best to live as human beings in a very difficult situation.

Getting to Gaza – how to do it?

The campus of the Islamic University of Gaza looks like it could be in Canada… except for the palm trees!!!

Ok – the invitation is there, but could you really go?

Why not? Canadian students visit lots of different places in the world – from Taiwan to Thailand, Chile to China. Why not go to Gaza? You have to get there through Israel. But airfare is cheap – a couple of popular booking sites advertise round-trip fares to Tel Aviv as low as $400.

Is it safe? Notwithstanding it being described as an “open air prison”, for a visitor it certainly didn’t feel dangerous. In fact, I felt completely safe. and I found the Palestinians in Gaza to be unfailingly friendly, curious and welcoming. And it was not expensive – a lot cheaper than Israel, for example.

Wouldn’t it be cool to be the first person in your class to visit Gaza?

But there IS one problem – you will have to get permission from Israel to enter Gaza, just as Ahmed and his friends need permission to exit. So ask the Israeli embassy in Canada if you can visit. They might say “yes”.

But if they say “no”, you might inquire as to why it is that you can visit Israel, or China or Chile, but not Gaza. If you are just a curious Canadian, what possible harm could that do to Israel?