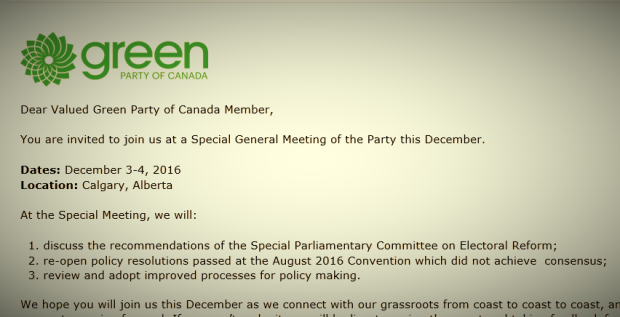 The Green Party of Canada (GPC) will convene a special general meeting of members in Calgary on December 3 and 4 to reconsider contentious resolutions adopted at its August convention, including a motion to support the movement to boycott Israel (called BDS). The email from Executive Director Emily McMillan also revealed that an internal survey of members appears to show that while boycotting Israel does not have majority support in the party, a significant minority (29%) of GPC members does approve of it. What happens next? read more….

The Green Party has been in an uproar since its convention which was held in Ottawa in early August. At issue is a vote to support BDS, the international call to boycott and apply sanctions against Israel for its treatment of the Palestinians.

The motion to support BDS was brought to the convention by GPC members concerned about human rights for Palestinians. Party leader Elizabeth May initially seemed to approve of having the issue go to a vote, but under attack by Israeli lobby groups later changed tack and devoted quite a bit of energy trying to head it off.

May seemed to have three main reasons for opposing the motion:

In any event, despite May’s efforts, the motion was duly adopted by a wide margin at the convention.May considered resigning, but the GPC leadership instead has called for a special meeting to reconsider “non-consensual” motions, including that on BDS.

Internal survey of members on BDS

The decision of the leadership was in part influenced by an internal GPC survey of members on their support for BDS taken immediately after the convention. Over 2000 GPC members participated, of whom about 29% (or about 600 people) indicated support for the resolution. However, 44% indicated they thought the motion should be repealed. Another 28% had a different opinion, not necessarily opposing the motion, but clearly uncomfortable with the fact that the motion had targeted Israel.

Many human rights activists in the party feel betrayed by the leadership. They argue that they followed the democratic process, and their motion was carried by a significant majority of delegates at the convention. (There had also been strong support expressed during an on-line vote prior to the convention.) So they feel that attempts by the party brass to undo the decision are highly irregular and undemocratic.

But on the other the GPC survey results seem to indicate that among the broad membership, there is much less support than the activists might have hoped.

How to move forward? Three broad options present themselves to GPC members interested in both environmental protection and promoting human rights for Palestinians.

REMINDER: THERE IS STILL TIME TO WIN $1000 IN OUR ESSAY CONTEST!! A $1000 prize is available for the best essay by a Canadian under 30 on whether Canada should support BDS. Get more info by clicking on this link. Contest ends September 30th.

Do you want to support the educational work of Canada Talks Israel Palestine (CTIP)? Why not join? Or make a donation? Or learn more about what we do?  Contact us at membership.ctip@gmail.com.