Israeli Prime Minister Benjamin Netanyahu wrote an urgent letter to Prime Minister Trudeau imploring him to oppose the decision of the International Criminal Court to investigate Israel for potential war crimes. The ICC investigation, if it can’t be stopped, will be a big problem for both Trudeau and Netanyahu. But it could be an even bigger problem for Benny Gantz, (lower right) the man who would like to replace Netanyahu. Read why… END_OF_DOCUMENT_TOKEN_TO_BE_REPLACED

At the recent NATO summit, US president Trump called Canadian prime minister Trudeau “two-faced” for gossiping about him behind his back. That was certainly mean and rude. But guest columnist Grafton Ross argues that it might be an accurate description of the Trudeau Liberal policy towards Israel/Palestine. Read more… END_OF_DOCUMENT_TOKEN_TO_BE_REPLACED

Conservative hopeful Andrew Scheer recently mailed a platform statement to selected Jewish Canadian voters. It had 10 points, of which none relate to defending the rights of the Jewish minority in Canada. Eight of the ten relate to defending Israel. Read more.

END_OF_DOCUMENT_TOKEN_TO_BE_REPLACED

The Israel lobby has been very active in this election, attacking candidates who are critical of Israel by claiming they are “anti-Semitic” and demanding that parties drop them. In some cases, it worked and parties flinched. But not always. Its campaign against NDP candidate Miranda Gallo (above) failed. Has the Israel lobby gone to the well too many times? Read more. END_OF_DOCUMENT_TOKEN_TO_BE_REPLACED 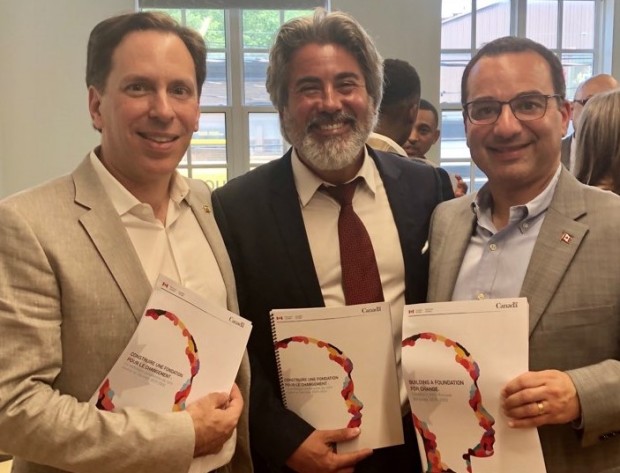 It was all smiles from B’nai Brith president David Mostyn (left) and MP Michael Levitt (right), Chair of the Canada Israel Parliamentary Friendship Group, as Federal Minister of Canadian Heritage Pablo Rodriguez released the Federal government’s long awaited anti-racism strategy. But despite their brave faces, Israel’s lobbyists were not able to get criticism of Israel defined as “racism” in the federal document. In fact, Israel is not even mentioned. Read more.